Muslims detained for protesting dismantling of minaret in Georgia

Muslims detained for protesting dismantling of minaret in Georgia 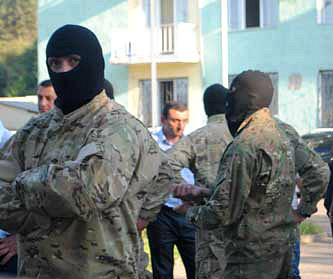 TBILISI, DFWatch–The local municipality in the village Chela in Adigeni in Georgia has started to dismantle the minaret of a mosque, which has caused concern of Muslims.

The police was at the site of the minaret from morning and prohibiting local Muslims from entering, which resulted in a rally being organized outside and several people being detained.

Interior Ministry representatives explained that several persons resisted the police in Chela and some are also accused of physical resistance.

One of the people who protested, Merab Tsulukidze, told Interpressnews that some details of the minaret were destroyed during the dismantling.

The minaret was constructed a one month and a half ago.

Later on Monday, the Revenue Service issued a statement about the dismantling of the minaret in Chela, which said that it was being done because of the need for a commodity examination.

The statement reads that entrepreneur Jambul Abuladze July 14 purchased steel constructions in Turkey and brought it to Georgia in order to construct a minaret. After studying customs declaration and import documents, the Revenue Service concluded that there is ‘reasonable doubt that goods might have been incorrectly classified in the documentation, which may have caused reducing taxes for import.’

“It is impossible to define the amount of reduced taxes without physically examining the goods and without appropriate examination,” statement reads adding that Jambul Abuladze was noted about this information on August 21.

“Since the weight of the minaret construction and commodity code may not correspondent to the declared data, the Revenue Service decided to start demolishing it on August 26,” the statement reads, adding that the Revenue Service will provide restoration costs.

Samkhretis Karibche, a local media outlet from Southern Georgia, reports that the local municipality of Adigeni started studying the issue of the new minaret in Chela, claiming that it was illegal. The municipality decided to take down the minaret and fine local Muslims with a 200 lari fine (USD 120) for illegally constructing it.

According to municipality representatives, no documents were presented to local government about the construction of the Minaret.

A month and a half ago, when the minaret was constructed next to the Mosque, locals and representatives of the organization Sazogadoebrivi Darbazi started gathering signatures demanding to remove it; however Samkhretis Karibche writes that the local population believes ‘someone deliberately is bringing tension to the village because Muslims and Orthodox until now have lived in peace.’

On Monday, Karibche posted a photo report which shows that special police were brought to the rally to disperse it, after which some of the rally participants were detained.

The Institute of Tolerance and Diversity issued an appeal about Monday’s events, which reads that the dismantling of the minaret led to a protest by locals and the use of violence from the police, which resulted in people being detained and several Muslims being beaten.

“On the background that government wasn’t able to provide freedom of praying, assembly and movement in Nigvziani, Tsintskharo and Samtatskaro, when no people were punished for violating the constitutional rights of Muslims and which became permanent, this new step by the government may be seen as irresponsible, and puts the religious peace and the constitutional order in danger,” the statement reads. The organization appeals to the government to take measures and restore the violated rights of religious minorities.

Interpressnews on Monday quoted Tariel Nakaidze, chairmen of Georgian Muslims Union, saying that minarets in Georgia are constructed in violation of law.

“But there is no law about constructing minarets in Georgia. This doesn’t mean we avoid the law. We are ready to bring those constructions into legal frames,” he said.

The Muslims Union also issued a statement asking to define how legal it was to dismantle the minaret.

“We also appeal to the prime minister to take all measures to calm down the tense situation against Muslims recently,” the statement reads. “It is also important to define how necessary it was to so roughly and provocatively demolish the minaret.”
By DFWatch staff| 2013-08-27T14:28:16+04:00 August 27th, 2013|Categories: Society|Tags: religious discrimination|0 Comments