Museum in Stalin’s hometown to focus on history of stalinism

Museum in Stalin’s hometown to focus on history of stalinism 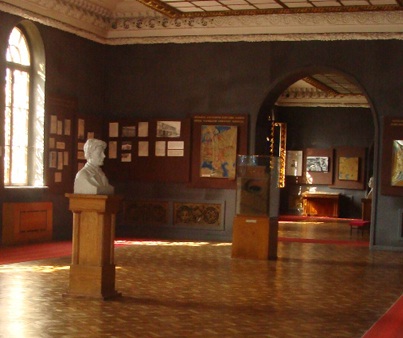 Georgia's culture minister Nika Rurua today presents a new concept for the museum in Josef Stalin's hometown Gori. It is to focus on the history of stalinism.

TBILISI, DFWatch – The museum dedicated to Soviet dictator Joseph Stalin in his hometown of Gori in Georgia will change name to the Museum of Stalinism.

The Ministry of Culture is behind the idea that the museum will offer visitors a historical account of stalinism, and not only the person. A board of international advisers will monitor the implementation of the idea.

The Stalin Museum was opened in 1937 by Lavrentiy Beria, State Security Administrator and politician during the Soviet Union.

The statue of Joseph Stalin was standing in front of the museum in Gori for years. The Georgian government suggested to move the statue to the national museum in Tbilisi, called the Museum of Soviet Occupation, but many protested against this idea.

One morning in the summer of 2010, people in Gori woke up to discover that the statue had disappeared. It was dismantled at night. The statue was moved to the museum in June the same year.

The Stalin Museum in Gori containts about 60 000 items and is located on the central square. It contains the house where he was born, an exhibit building with a tower and the railway carriage on which he travelled to Tehran, Italy and Potsdam.