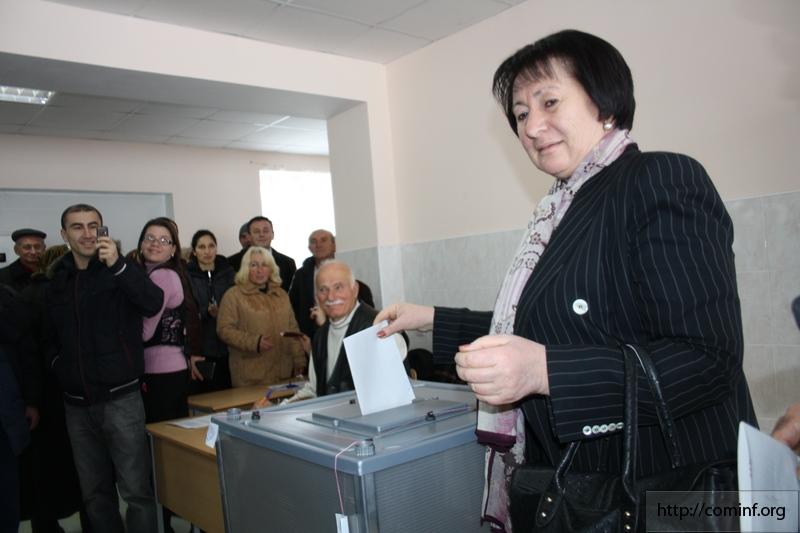 Alla Dzhioyeva casting her vote November 27, 2011. She won, but a court cancelled the election. (RES.)

TBILISI, DFWatch – In South Ossetia, the opposition leader Alla Dzhioyeva has decided to set up a new political party.

“We are committed to continue the course on which we set out. Of course, we will prepare for parliamentary elections, but now we believe it is necessary to change the election system,” she said, and explained that she believes due to the social and political realities in South Ossetia, the only acceptable election system is a mixed proportional-majoritarian system.

Alla Dzhioyeva was not a candidate in the latest election, but she ran in the cancelled election in November 2011, competing against Kremlin favorite Anatoly Bibilov in the second round. Preliminary results showed her clearly winning, but then a court declared the election invalid after a complaint.

The election which ended yesterday is considered illegal by Dzhioyeva, and she refused to participate both as a candidate and a voter. Former local KGB head Leonid Tibilov and presidential human rights commissioner David Sanakoyev competed yesterday. In the first round they knocked out another Kremlin favorite: Dmitry Medoyev, South Ossetia’s ambassador to Russia.

According to preliminary results, Tibilov gained victory. The final results will be announced Monday afternoon.

While commenting on the election to Ria Novosti, Alla Dzhioyeva reminisced about how she earlier in her career came onboard the regime of Eduard Kokoity, and served as an education minister, an experience she regrets today. “I am not going to make the same mistake twice,” she says, and explains that she will study the newly elected Tibilov and how he conducts himself and only after having seen his first steps decide whether to support him.

The change in Dzhioyeva’s career came when she and her supporters began rallying in front of the government building in Tskhinvali demanding to transfer political powers to her as the legitimate winner of the elections.

Her protest lasted for ten days and ended when a compromise was made between her and the government of Kokoity, which involved the latter resigning and Dzhioyeva allowed the right to participate in the rescheduled elections on March 25. Things quieted down for a few weeks, until Dzhioyeva’s movement decided that the agreement hadn’t been lived up to by the government. She withdrew her candidacy and planned to have her inauguration on February 10.

Meanwhile Bibilov also withdrew his candidacy, with the justification that he wanted to give way to other leaders and opportunity to conduct free elections.

The day before, on February 9, a group of militiamen in fatigues and masks forced themselves into Dzhioyeva’s headquarters and took her away. She has later told journalists that she was beaten by the militia as she was taken to hospital apparently having suffered a heart attack.

She was checked out from hospital about two weeks ago, after having problems checking out of there, she told an Ossetian opposition website. She also had difficulties getting access to her medical file which contains the doctor’s assessment of her injuries.

It later emerged that Leonid Tibilov had helped her with the hospital issues. If we are to believe Ossetian media, more than 70 per cent of Tibiliov’s votes came from former supporters of Dzhioyeva.

Another factor behind Dzhioyeva’s victory in November may have been that Dzambolat Tedeev, coach for Russia’s freestyle wrestling team, supported her in the first elections. He is very popular among Ossetians. Tedeev later was fired from his position as coach.

“Perhaps I, Ossetian woman – went to polls and political woes, because there were no candidates who would definitely win my political sympathies in terms of our warranty tomorrow. This in its time forced me to place my candidacy, because I for sure knew about myself that I of course won’t betray myself, my ideals and life attitudes,” Osetia.Kvasia.ru quotes her saying.