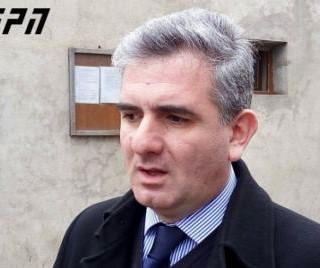 TBILISI, DFWatch–A lawyer for the Georgian church claimed on Monday that there is a plot to assassinate the head of the church, involving high-level clerics.

One of the clerics implicated in the attempt on Patriarch’s life is Metropolitan Petre Tsaava, according to Edisher Karchava, a lawyer working for the Patriarchy who spoke to several news media on Monday.

“[Metropolitan] Petre was apparently actively involved in the attempt to kill the patriarch. As for his accomplices, I can’t name specific persons, but one of them is now in jail. I’m talking about Giorgi Mamaladze,” Karchava told Channel 1.

Several persons were involved in the plot with the purpose of “dethroning the Catholicos-Patriarch by all means… including liquidation.”

Karchava added that he will ask the Holy Synod to exclude the Metropolitan from its ranks.

Soso Okhanashvili, a former head of patriarch’s security detail, was part of the plot, he continued. Okhanashvili resigned in February in the wake of alleged assassination plot against Patriarch Ilia II’s personal secretary.

Tsaava’s rank of metropolitan is the second highest in the church after the patriarch. He is a member of the Holy Synod and leads the strategically important Chkondidi diocese.

Tsaava has often appeared on TV openly criticizing alleged corruption among the clerics. He has particularly criticized Shorena Tetruashvili, the patriarch’s secretary who was the target of the first assassination plot, according to prosecutors. Although not holding any formal position within the Church hierarchy, she is believed to hold a strong sway over the archbishops and the patriarch himself.

Later Monday, Tsaava flatly denied all accusations and accused the Patriarchate’s lawyer of slander. He claimed that Tetruashvili is behind the allegations.

“I will not enter into a debate with these demonic forces,” he told Pirveli TV.

“Karchava voices the wishes of the informal head of the Patriarchate,” he said, with clear reference to Tetruashvili.

The scandal in the Georgian Orthodox Church began in early February with the arrest of Archpriest Giorgi Mamaladze at Tbilisi airport as he was about to board a plane with cyanide in his luggage. He was charged with planning to murder Tetruashvili – a case dubbed ‘the Cyanide Affair’.