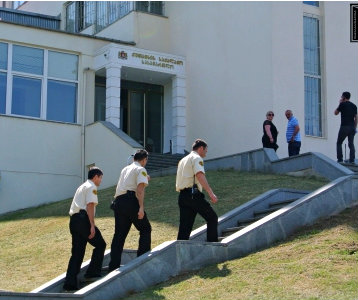 The police officer suspected of fatally shooting a young man in Kutaisi on Friday has been charged with murder. (Interpressnews.)

TBILISI, DFWatch–The police officer who shot to death a young man in Kutaisi has been charged with purposeful murder and exceeding his power using a firearm and faces up to 15 years in jail.

The police officer pleaded not guilty. His lawyer told journalists that he would ask for bail for his client.

Kutaisi City Court will Monday consider whether to place the officer in pre-trial detention.

The case has been investigated by the Prosecutor Office’s Kutaisi bureau.

The detained policeman is suspected of shooting at a 22 year old man in Kutaisi on Friday. The victim, Mirza Gochuadze, was who was driving a Subaru Forester. Police suspected him of having robbed a nearby grocery store. He didn’t comply with police orders to stop his car and eventually was shot in the head and crashed. He later died in the hospital.

The fatal shooting has caused massive outrage in Georgia. During the Saakashvili era, people became accustomed to the police shooting indiscriminately at suspects, by some account even purposely. The politicians currently in government were critics of police killing people with impunity.

Prime Minister Irakli Garibashvili has promised a fair investigation into the case.