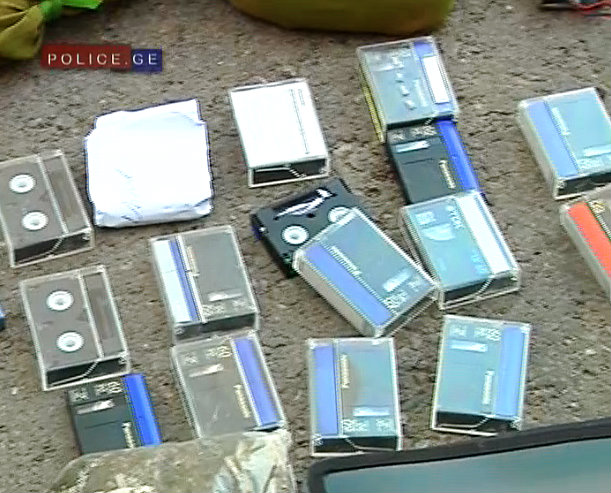 Some of the tapes found in an underground weapons cache in Samegrelo last week. (Police.ge.)

TBILISI, DFWatch–The Interior Ministry in Georgia Friday announced the discovery of more weapons in an underground cache in the western Samegrelo region.

“There are documents and video footage. There will probably be detailed information on Monday,” Interior Minister Irakli Gharibashvili said Friday evening on the TV show Positsia.

He also said that all in all, the Interior Ministry has about 13 000 surveillance video files, amassed over the years.

Gharibashvili had earlier promised to shred the archive by Sunday, but on Positsia said it will still be kept for some time yet. This was a decision by a commission working on the archive issue, he explained. He ruled out the participation of members of the National Movement in this work, as that would be like letting the criminals investigate their own crimes.

He also said he wants to organize screenings for diplomats, NGOs and media, similar to the one held a few days ago. He said the archive contains videos of politicians, journalists and people unknown to the public.

“We should analyze it, and we want to show it to diplomats, NGOs and media,” he said. “It is our obligation not to destroy the footage until society gets answers.”

He said that decision to show the videos to diplomats and media was done because people should know what was really happening during the Saakashvili era.

“You probably remember statements by critics that it is a myth that the National Movement tortured and raped people,” he said. “Our goal was to show people the truth.”

According to Gharibashvili, the archive contains video material from as far back as 2004 and 2005. He said the National Movement governments gathered compromising recordings of people as a method for nine years. This was ‘a state policy’, he said.