More Georgians think the country is moving in the wrong direction

More Georgians think the country is moving in the wrong direction 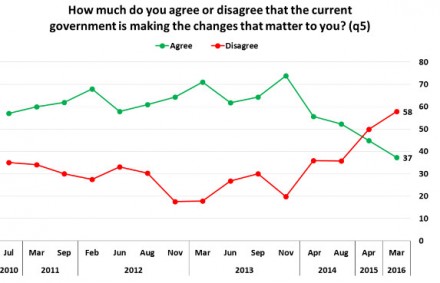 TBILISI, DFWatch–A larger share of Georgians think the country is going in the wrong direction, according to  new opinion poll published Monday by the National Democratic Institute (NDI).

According to the poll, 39 percent of people think that Georgia is moving in wrong direction, 36 percent think it is not changing at all, while 20 percent believe that Georgia is going in the right direction.

This is the worst result over the past seven years of NDI polling.

In November, 2013, more than 50 percent believed that Georgia was going in the right direction and less than 10 percent thought to the contrary.

In March last year, the result was almost the same as in 2016.

42 percent of the questioned said that their households is in a worse situation since October, 2012 when there was a change of government. 47 percent said the household is in the same situation, while ten percent said it has gotten better.

When asked about what the most important national issues are, 57 percent answered jobs, 35 percent rising prices/inflation and 30 percent poverty, followed by pensions (26 percent) and territorial integrity (23 percent).