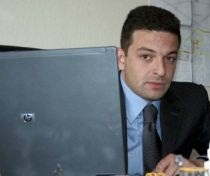 TBILISI, DFWatch — A friend of the Tbilisi mayor who is co-owner and director of a large construction company was yesterday detained accused of money laundering.

Giorgi Kelbakiani, who owns 70 percent of the shares in, and is director of NCC Ltd, was detained on Wednesday together with Archil Chogovadze, the financial director of the same company, after hours of interrogation.

Kelbakiani is a friend of Tbilisi Mayor Gigi Ugulava, and was four years ago director of Tbilisi Water Company. Media at the time wrote many critical articles about how he made use of his friendship with the mayor, but the court system didn’t react. Kelbakiani’s lawyer claims that the detention is not related to the activity of this company.

Instead, it looks like investigators are focusing on the construction company NCC’s role in development projects Tbilisi municipality is financing, including the one at Rike Park, which is located in Old Tbilisi.

The two are still being investigated. Another part of the charges is regarding Buddha Bar, which is located in the Rike district, as well as where the money came from to build fashionable cottages near Tbilisi.

Both of them are accused of money laundering, which is punishable with up to 12 years in jail.

Kelbakiani’s lawyer states that his client denies the accusations and considers them absurd.

Gigi Ugulava said these detentions are part of a campaign against him; even though he wasn’t mentioned in this case.

“Kelbakiani’s Company is building a theatre ordered by of the Tbilisi Development Foundation. Accordingly it’s logical to think that the new government tries to harass the local government. The Prime Minister a few days ago learned that local government is not subordinate to him. I appeal to Prime Minister Ivanishvili: if institutions out of your control annoy you, I suggest arresting me on made-up accusations,” Gigi Ugulava states.

Interior Minister Irakli Gharibashvili said on Wednesday that Kelbakiani was detained based on urgent information the ministry had and the goal isn’t to detain some specific people, but to restore justice.

“We found out that this person legalized illegal income. Our goal was to find a trace to Mr Ugulava. It was absolutely natural process. We received urgent information and acted in accordance with the law.”

He says none of the detentions have a political background.

“The former government tries to relate each detention to political persecution and label it as if we are detaining members of the National Movement and persecuting them. This is not true. This is a very natural process,” he said.