Ivanishvili will not impeach Saakashvili

Ivanishvili will not impeach Saakashvili 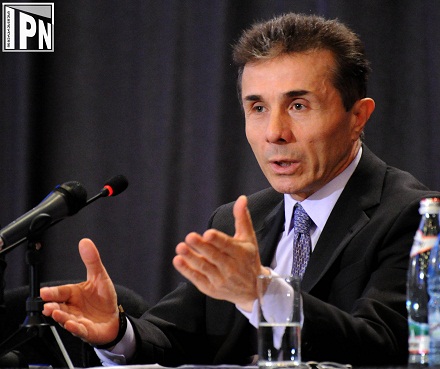 Prime Minister Bidzina Ivanishvili said today that he will not impeach President Saakashvili, as he promised to do one year ago. (IPN.)

TBILISI, DFWatch — Prime Minister Bidzina Ivanishvili will not impeach President Mikheil Saakashvili, as he previously had said he would do.

“When we enter parliament as a majority we will immediately begin to discuss his impeachment if he doesn’t proceed to resign,” Ivanishvili said November 1, 2011.

But Thursday, he said he was more reluctant to impeaching the president. The new PM said the international community has sent him negative signals about the idea of impeachment.

He said he might introduce changes to the constitution which would curtail the president’s powers.

Ivanishivili spoke in front of a large gathering of journalists who asked him about a variety of issues, marking a shift from the one-way communication strategy Georgians have grown accustomed to under Saakashvili.

He said that Georgia has no precedent for impeachment, but that his government will invite well-known foreign specialists to shed light on the impeachment issue.

The next presidential election is scheduled for October 2013.