Ministers bring staff with them in Georgian gov’t reshuffle

Ministers bring staff with them in Georgian gov’t reshuffle 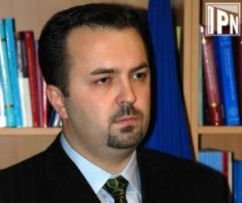 Dimitry Shashkin brings with him many officials from the education ministry to his new job as defense minister. (IPN.)

TBILISI, DFWatch – Two ministers who where switched around in a government reshuffle are taking their staff with them.

On Monday Shashkin named his new deputies and departments heads.

Also new deputy defense minister is Maya Siprashvili. She was the prison minister’s adviser in 2009. Later in 2010 she became chair of international relations and program department at the education ministry. She was given the presidential awards of excellence and dignity.

Davit Nardia, who was rector at the National Defense Academy, will also be deputy defense minister.

Ioseb Topuridze, who used to be deputy chair of the constitutional security department at the interior ministry, will be head of the joint staff’s administration. Head of the defense ministry’s administration will be Genrieta Mumladze, who has held the same position at the education ministry and the prison ministry.

A new department will be established at the ministry, to be headed by Giorgi Gulua: The department of information technologies.

Also new interior minister, Backo Akhalaia, is bringing with him old staff from his former post, the defense ministry.