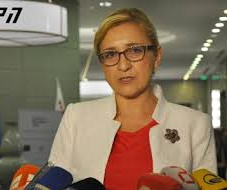 Tbilisi, DFWatch – Last year, rivalry between Georgia’s top two men over who would represent the country at the UN climate conference led to weeks of uncertainty and squabbling. That time, the president had to back down.

He has do the same once again, it seems.

Prime Minister Irakli Garibashvili will head Georgian delegation on the 70th Session of the UN General Assembly, while President Giorgi Margvelashvili will take part ‘in certain activities’, stated Tamar Beruchashvili, Minister of Foreign Affairs, on Monday, thus finally clearing uncertainty over who should represent Georgia at the event.

She said Garibashvili will perform a speech at the session as a head of the delegation and participate in business forum and other events.

President will attend one event on sidelines by invitation of his Lithuanian colleague, President Dalia Grybauskaitė.

“On September 29 in New York a high-level discussion is scheduled, which is dedicated to the future of Eastern Europe and strengthening women’s participation. This is a high-level event and presidents of  several other countries will attend it,” Tengiz Pkhaladze, presidents foreign policy advisor, said last week of Margvelashvili’s visit to New York.

President will hold several meetings in Washington and deliver speeches at several universities.

The rivalry between Georgia’s top two people  to represent the country at the high level international gatherings has been going on unabated since enmity between the president, on one hand, and the current and former PMs, as well as majority of Georgian Dream members, on another hand, became public in early 2014, soon after the presidential elections.

The 70th UN General Assembly session will take place from September 28 to October 3 in New York.