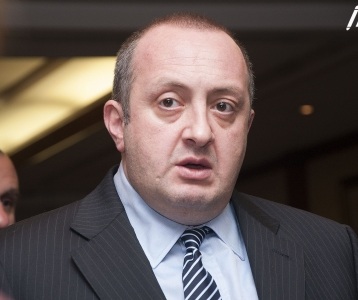 President Giorgi Margvelashvili says there was ‘very serious organized work’ against his planned visit to the US. (Interpressnews.)

TBILISI, DFWatch–Georgian president Giorgi Margvelashvili has canceled a planned trip to New York to attend the UN climate change summit, after weeks of squabbling with the government about who should represent the country.

The decision comes after the businessman who brought together the government coalition, Bidzina Ivanishvili, gave an interview to a local newspaper, in which he criticized Margvelashvili for harming the country’s image.

On Thursday, Margvelashvili said at a press conference that there was ‘very serious organized work’ against his planned visit to the US, which finally resulted in the visit failing.

“In fact I think this is an incorrect step taken against the institute of the president,” he said, adding that this wasn’t in the interest of the state but a step taken on the basis of a confrontation between state bodies.

Even though Margvelashvili had a personal invitation to attend the summit and deliver a speech, which his administration reported a few weeks ago, he still decided not to go after being criticized by Ivanishvili.

‘There is democracy in Georgia and democracy means that no-one is director. Power, balance is distributed between branches,” Margvelashvili said at a press conference held at the presidential palace in Avlabari.

Prime Minister Irakli Gharibashvili also responded to this issue on Thursday by saying that it is very unfortunate when a simple issue like going to the UN and represent the country has become subject of so much speculation.

He said since he is head of government, the government considered it necessary to send the PM to represent the country.

Gharibashvili told journalists that every word said by Ivanishvili and his evaluation is very important for him.

“Today I only think about problems, challenges, hardship which accumulated for years. Our people are in very difficult situation and a challenge for our government today is to overcome poverty and economic development,” he outlined adding that he had been preparing for the UN summit for months.