Minaret back up in Georgian village Chela

Minaret back up in Georgian village Chela 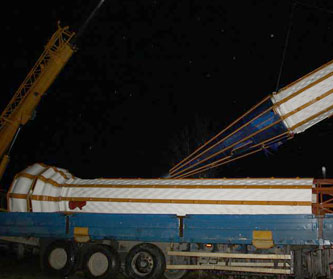 The minaret in Chela was put up at the mosque Wednesday. (Photo: Samkhretis Karibche.)

TBILISI, DFWatch–The minaret that was taken down in a Georgian village was put back up at the mosque Wednesday night.

According to the local newspaper Samkhretis Karibche (Sknews.ge), the local government in Adigeni issued a permission to restore the minaret in Chela on November 27, when Muslims had gathered all the necessary documents. The majority of the city council members supported the decision.

Muslims are not afraid of restoring the minaret and were expecting that it would be restored as soon as they had all the necessary documents.

Sknews.ge quotes Imam of Chela Mosque, Jambul Abuladze, saying that they thought it was better to restore the minaret at night due to ‘special circumstances.’

Muslims are optimistic that there will be no more tension.

“We are all Georgians, but with different religion, and we must live together in this country in peace,” Abuladze said.

Roads in the village were closed off while the minaret was reinstalled, and the entrance to the mosque was locked, due to safety issues. The process is now finished.

Priests of nearby villages have arrived at the spot and are protesting against the restoration of the minaret.

“It is not right to destroy churches while building minarets and mosques,” Priest Davit Isakadze told Sknews, adding that Muslims in Georgia have enough mosques and he doesn’t believe the promises that there will not be loud calls for prayer from the minaret.

Isakadze warned that the whole Georgian Orthodox people will protest against the restoration of the minaret.

The minaret in Chela was first installed in August. It was followed by protests by Orthodox Christians. On August 26, the minaret was dismantled by the Revenue Service which claimed that there were problems with the custom’s clearance of building materials imported for the minaret.