Militants release all hostages in Yerevan, but stand-off continues

Militants release all hostages in Yerevan, but stand-off continues 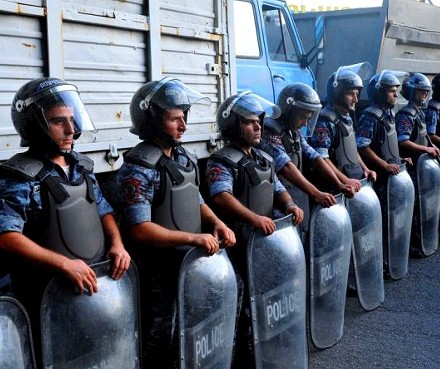 TBILISI, DFWatch–A group of up to 25 armed militants occupying a police building in Yerevan released all their hostages Saturday but refused to surrender, demanding the president’s resignation and the formation of an interim government.

Two hostages were released early on Saturday, and the last two in the afternoon.

This came about after agreement was reached to allow them to hold a press conference.

According to a reporter for Kavkaz Uzel who attended the press conference, the militants disputed information given by the government. Spokesman for the militants Varuzhan Avetisyan claimed they did not use force against the policeman who died on the first day of the hostage taking.

He also said the militants do not trust that the government will not use force against them, and pointed to snipers on the rooftop.

The militants reject a claim by government negotiator Vitaly Balasanyan that they no longer are demanding President Serzh Sarksyan’s resignation.

One police officer died and six were injured when up to 25 militants entered the building early in the morning on July 17. The armed militants are members of Sasna Tsrer and their main demand is to release Jirair Sefilian, one of the leaders of the opposition group Founding Parliament, to which the Sasna Tsrer group is loyal. They also demand the government’s resignation and the formation of an interim government.

Supporters have rallies outside and tried to break through the police cordon.

In his first comments since the start of the crisis, Armenian President Serzh Sargsyan Friday that the situation has lasted longer than ‘they can allow’, but that he will solve it only through lawful ways. Speaking at a meeting with law enforcement bodies, he called on the militants to lay down their arms.

Sargsyan said the government continues to act with patience.

“The life and well-being of every citizen is precious to us,” he said.

The president denied media reports about alleged expected dismissal of the government. He said that the government of Armenia believes it is not appropriate to launch negotiations with an armed group.

Zhirair Sefilian is a former commander of the Shushi special military battalion and a veteran from the war in Nagorno-Karabakh. He is founder of the New Armenia Public Salvation Front, an opposition group.

In an interview with Kavkaz Uzel in connection with the wave of protests against the increase in electricity tariffs in 2015, Sefilyan said that he believes 2016 is the protest movement’s ‘last chance to overthrow the regime’ in Armenia, because there will not be resources for it later due to migration and the decline of the economy.

June 20 of this year, he was arrested together with six other people. Investigators claim he and his accomplices plotted to occupy the TV tower in Yerevan and administrative facilities. The group’s goal was to escalate the situation in Karabakh through provocation. Law enforcement bodies seized a weapon when they searched him.

There was more tension at the police department building on Wednesday and Thursday. Wednesday, supporters of the armed group demanded that opposition MP Nikol Pashyan be allowed to bring food inside without the involvement of the police. After this demand was rejected, they attempted to break through the police cordon, which led to clashes.

There were clashes on Thursday night as well. Protesters threw stones at the police who used tear gas to disperse the crowd. 45 people were injured in the clashes. 136 people were arrested. Some of them may face from three to seven years in jail for resisting the police, while the armed group may be jailed for twelve years.