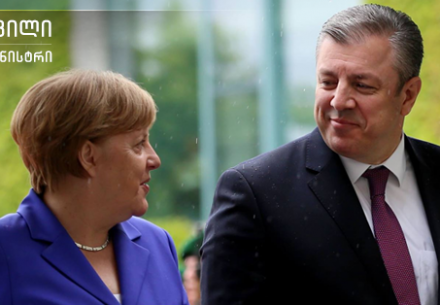 ‘Visa liberalisation for Georgia is not a distant matter,’ the German chancellor Angela Merkel stated during a joint conference with the Georgian prime minister Giorgi Kvirikashvili in Berlin on 15 June.

Although Merkel didn’t specify any concrete timeframes, her statement was received in Tbilisi with optimism as Germany was considered one of the most vocal opponents to granting Georgia visa waiver.

Until June, the Georgian government insisted that visa waiver would come into force in summer. However, in the beginning of the month, the debate in the Council of European Union was postponed and the process was halted, reportedly by the request of Germany and France. German media reported that the issue was connected to Georgian organised crime. On 15 June, Prime Minister Giorgi Kvirikashvili paid an official visit to Germany.

Angela Merkel stressed that Germany supported the visa waiver for Georgia, but not before a temporary suspension of the visa liberalisation mechanism by the European Parliament.

‘The European Commission has ruled that Georgia has fulfilled all the criteria for visa liberalisation. Today we are discussing when we can make a final decision about the visa liberalisation. In a televised interview last week, I mentioned that we needed to debate the visa liberalisation in the context of a suspension mechanism. It does not necessarily affect Georgia directly, but in general, if a difficulty arises, for example there will be a lot of requests for receiving political asylum from nationals of a given country, as it happened last year in the case of Syria… Although I don’t want to repeat it, we are looking towards the suspension mechanism. The European Parliament will now have to decide on this issue and I hope that very soon there will be a vote in the European Parliament on visa liberalisation for citizens of Georgia’, Ms Merkel said.

When asked about the timeframe for visa waiver, Ms Merkel pointed out that the issue was connected to the current negotiations in the European Parliament and that it wasn’t ‘a distant matter’.

‘The [European] Parliament, obviously, is independent, but we’ll do everything in our power to finalise the process as soon as possible. We took note of the Commission’s recommendation saying that Georgia fulfilled all the criteria required for visa liberalisation and Germany isn’t opposed to that recommendation. In combination with the suspension mechanism, the final decision will be beneficial for Georgia’, Ms Merkel said, adding that this issue would be discussed together with the case of Ukraine.

The chancellor admitted that criminal activity of Georgian citizens in Germany had some influence on Germany’s position.

‘Combatting crime also plays an important role in the process. I am pleased that we have strengthened cooperation between our Ministries of Interior’, Ms Merkel said.

The ruling Georgian Dream assessed that PM Kvirikashvili’s meeting with Angela Merkel confirmed the fact that Germany supported visa waiver for Georgia. The deputy PM Kakha Kaladze pointed out that Georgian citizens would be able to travel to the Schengen zone ‘by September, October’, or ‘by the year’s end’.