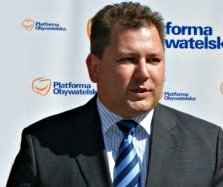 Krzysztof Lisek, Polish MEP from the center-right European People’s Party, was surprised to find that Saakashvili ally Vano Merabishvili did not have a TV set and no contact with with his family. (Interpressnews.)

TBILISI, DFWatch–Vano Merabishvili says he is optimistic, but complains about lack of information, according to Krzysztof Lisek, Member of the European Parliament (MEP), after meeting the former Prime Minister in Matrosov Prison Tuesday.

Representatives of the Prison Ministry tell DF Watch that Merabishvili has no restrictions on information but has the same conditions as other prisoners.

Merabishvili is in pre-trial detention charged with abuse of powers, embezzlement of state money and appropriation of another person’s property.

Spokespersons for President Mikheil Saakashvili’s United National Movement (UNM) party have claimed that the detention is politically motivated and call it ‘an attack on a competitor party’ from Bidzina Ivanishvili’s Georgian Dream coalition, as Merabishvili was a likely pick for presidential candidate for the UNM party.

Krzysztof Lisek, who represents European People’s Party (EPP), asked Monday for permission to meet Merabishvili. He arrived with a delegation from the European Parliament, which arrived in Georgia Monday morning and held meetings with government officials, the UNM and civil society representatives.

Lisek told journalists after leaving the prison that the meeting lasted about half an hour and that Merabishvili said he is optimistic and hopes he won’t have to be more than one year in prison.

Lisek also remarked that he was surprised that Merabishvili asked many questions and doesn’t have a TV set and lacks contact with relatives.

Representatives of the Justice Ministry told DF Watch that Merabishvili has the same rights which are defined by Georgian legislation and that he is not subject to any restrictions.

Thea Tsulukiani, Minister of Justice said on Tuesday that ‘Merabishvili is an ordinary prisoner and all of his rights will be protected.’

She said the former prime minister has no problems and has normal conditions.

“As for a TV set, if he acts like it is required by the prisoner code, then the prison department will give him a TV set and a radio set as encouragement,” she added.

The press office of the Prison Ministry explained to DF Watch that none of the prisoners in Matrosov prison have a TV set and there is no equipment for this, so Merabishvili cannot be an exception; however he is not subject to any restrictions. He is allowed to read newspapers and receive information.