In Memoriam of Sen. John McCain

In Memoriam of Sen. John McCain 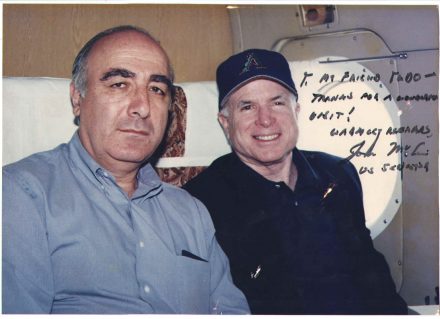 Tedo Japaridze and Sen. John McCain in helicopter en route to Pankisi in 2002.

I had the great honor of meeting Senator McCain in early November of 1994 when I was Ambassador to the United States from Georgia.  He quickly and organically understood the challenges of a young democracy like ours trying to overcome seven decades of Soviet communism.

Senator McCain was a constant champion for Georgia in the United States and in the free world.  He was never afraid to confront those in Moscow who felt that Russia controlling Georgia was some kind of God-given right. He supported our independence, our security, and our territorial integrity ferociously.

Georgians will always remember him for this.

But even more, they will remember him as an icon for everything good the United States stands for, especially to those of us who look to America to support the dreams we share with free people everywhere.  My nation is grateful for having the good fortune to have such a friend, and I am personally honored to have been engaged directly with Senator McCain for many years.