Memorial to the Armenian genocide unveiled in Tbilisi

Memorial to the Armenian genocide unveiled in Tbilisi 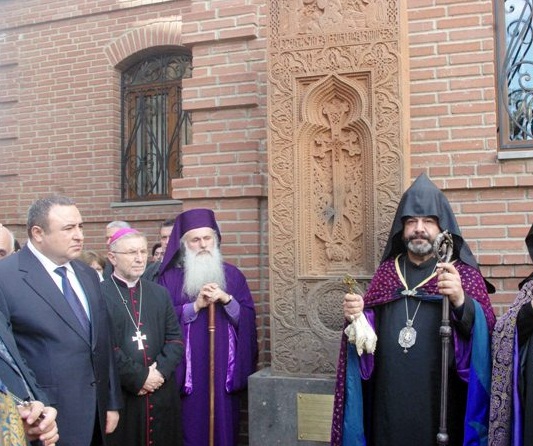 The memorial is a stone Khachkari with a cross and ornaments engraved. (Photo published by the Armenian community.)

TBILISI, DFWatch–A memorial to the Armenian genocide was unveiled in Tbilisi on Monday. The memorial is made of stone and stands in the yard of Surb Etchmiadzin Church in the capital.

Levon Isakhanian, representative of the Armenian community in Georgia, explained to DF Watch that Khachkari is a stone with a cross and ornaments engraved in it. This is a memorial statue and it is an Armenian tradition to place such stones on graves.

There are only a few Khachkaris left in Georgia, dating from different time periods.

This is the second Armenian stone memorial in Georgia. The first one was placed in front of another Armenian church in Tbilisi a few years ago in order to pay tribute to people who died in Tbilisi on April 9, 1989, during a pro-independence rally which was dispersed by Soviet soldiers.

The new Khachkar is dedicated to the commemoration day when Armenians were killed in Turkey in the beginning of twentieth century and which Armenians call genocide and demand that Turkey recognize it as such.

Every year on April 24, the Armenian community in Georgia hold rallies outside the Turkish embassy in Tbilisi. They pay tribute to those who were killed and want from Georgian government to recognize the genocide.

Although the Turkish government acknowledges mass killings of Armenians in the Ottoman Empire, it flatly denies notion of Genocide. Prime Minister Tayyip Erdoğan said in an interview with the German magazine Der Spiegel that there cannot be any conversation about any kind of genocide. He said he thinks that assessing these events is a subject for historians and lawyers, not politicians. Erdoğan said Turkey is ready to publish historical material and calls on Armenia to take the same step. He said he thinks it is a mistake when journalists and politicians use the word ‘genocide’.

The unveiling of the new stone memorial was held in connection with the April 24 commemoration and was attended by representatives of different churches.

“We appreciate the attitude of Georgians to this day and we want Khachkari to also become a symbol for Armenian-Georgian relations, which go back centuries.”

Although many countries acknowledged Armenian Genocide, it has not ever been discussed on a high level in Georgia, which tries to retain good relations with both neighbors, old sworn enemies – Armenia and Azerbaijan; nor Erevan ever approached Georgian authorities with this request.