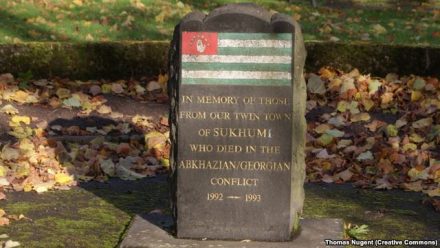 TBILISI, DFWatch–A memorial stone dedicated to victims of a separatist war in Georgia 1992-93 will be restored, the deputy the foreign minister of Georgia has said.

The stone in the town of Kilmarnock was recently taken down after a complaint from Georgia’s ambassador to the UK because it was decorated with the flag of the breakaway republic Abkhazia.

The stone will be placed in the same location, Georgia’s Deputy Minister of Foreign Affairs Davit Dondua said on Thursday, presumably without the red, white and green flag that symbolizes the unrecognized de facto republic (pictured right).

He added that official Tbilisi never demanded that the authorities of the Scottish town take the memorial down.

“Nobody meant the demolition or dismantling of the memorial,” Dondua said. “We simply pointed out to the local authorities [in Kilmarnock] that the memorial contains politicized symbols and does not correspond to the policy of the UK with respect to the territorial integrity of Georgia. In view of this, the local authorities promised to bring everything in line. For this purpose, the memorial was temporarily dismantled and, after being corrected, will be restored to its place.”

About a week ago, Tamar Beruchashvili, Georgia’s ambassador to the UK, said that she became aware of the monument through the internet and persuaded Scottish authorities to ‘handle’ the issue during her visit to Scotland a month ago.

“They fully accepted the information provided and agreed with the approach by the British state regarding Georgia’s territorial integrity and sovereignty, and the local council decided to dismantle this monument a few days ago,” Beruchashvili said.

The removal of the monument sparked outrage in Abkhazia, where the de facto Ministry of Foreign Affairs released an angry statement on November 10.

“The Ministry of Foreign Affairs of the Republic of Abkhazia regards such barbaric moves by the Georgian leadership as another vivid confirmation of the aggressive and anti-human character of the Georgian policy towards Abkhazia and its people.

“This behavior of the official authorities of Georgia is regarded as an act of vandalism aimed at destroying the historical memory of the Abkhaz people, against whom Georgia committed ethnic cleansing and genocide,” the statement reads.

Although the separatist government in its statement refers to the monument as dedicated to “Abkhaz warriors”, the text on it doesn’t contain reference to ethnicity and therefore doesn’t seem anti-Georgian, as seen from Tbilisi. The only problem is the separatist flag toward the top of the memorial stone.

“In memory of those from our twin town of Sukhumi who died in the Abkhazian/Georgian conflict 1992-1993,” the text on the monument reads.