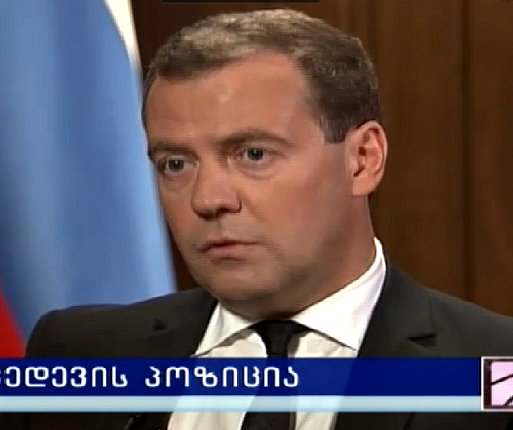 TBILISI, DFWatch–Russian Prime Minister Dmitry Medvedev interviewed by Georgian TV five years after the war: ‘Georgia should be interested in joining the Eurasian Union, because it is a neighbor of Russia.’

“We will never be neighbors with the US whatever happens. We may be partners and it is important to be partners, but we cannot be neighbors,” he says. “The best economic integration is achieved when people live in the neighborhood.”

The Eurasian Union is a proposed political and economic union between Russia, Belarus, Kazakhstan, Kyrgyzstan, and Tajikistan.

In an interview with Georgian TV channel Rustavi 2 five years after the Russia-Georgia war, Medvedev underlined that the idea of creating the Eurasian Union didn’t belong to President Vladimir Putin, but was an idea put forth in 1990. Previous presidents have supported this idea, including himself when he was president in 2008-2012.

“Not because it is an instrument to further Russia’s domination, but because we think it is the most modern and civilized method of coexistence,” he said, adding that the process includes the necessity of integration, closer economic potentials, trade, use of investments and humanitarian cooperation.

Medvedev says the idea has just started to become real. He pointed out that a few years ago, Nursultan Nazarbayev, President of Kazakhstan, Alexander Lukashenko, president of Belarus and Medvedev as president, signed a customs union and agreed to act and work in the direction of creating an economic union in Eurasia.

“Now we are continuing this way and we think it is a good instrument for integrating our economies,” he said.

Medvedev said he believes that whatever happens in the EU nowadays there are well integrated economic systems, which are stable, have common currency and common market with common values.

“We should take an example of it. Of course it will need corrections and to reject what doesn’t work properly, but it is a good example,” he said. “We want to create something like that. It is not about restoring the Soviet Union. Who needs the restoration of the Soviet Union? We live in 21. century.”