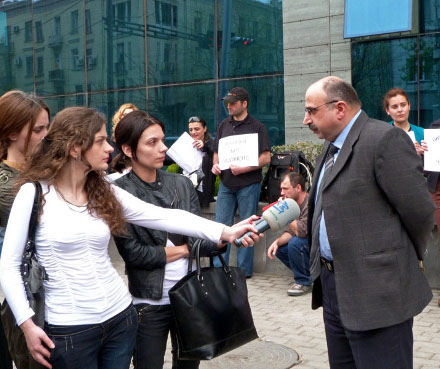 Zurab Bazghadze, director of marketing and development of Global TV, says the commission which regulates media has made them take certain popular Russian channels off the air, and it may have been done to aid their competitor Silknet, which is closer to the government. (Photo: Mari Nikuradze.)

TBILISI, DFWatch – The media regulatory body in Georgia Thursday said a cable station was trying to politicize the situation in order to divert attention from its own violations.

The body has fined Trialeti TV 5 000 lari (about USD 3 000) for broadcasting on a frequency to which it had no license. A campaign group for independent media reacted to the fining by demonstrating outside the GNCC office and Thursday published a petition as a way of raising awareness.

The petition, which explains the reasons behind the protests against GNCC, is also being circulated among foreign diplomats in Tbilisi.

“Instead of frequency regulation, the Georgian National Communication Commission is formed as an harassment mechanism towards free media. Because of its constant harassment, local broadcasters cannot compete with government controlled national broadcasters.”

But the GNCC responded with a statement saying the petition doesn’t give the full picture of the real situation and artificially politicizes the media sphere. The commission once more explained the reasons for fining Trialeti.

“This is another attempt by Trialeti at politicizing the issue in order to hide its own violations.”

The campaign group behind the protest, Solidarity for Free Media, Thursday continued its rally in front of the GNCC building, demanding a stop to the harassment of free media.

“The commission fined TV company Trialeti 5 000 lari without any grounds; they didn’t give Global TV a right to put Russian TV company TNT on their net. I call for the commission to avoid criminal law crimes,” said Mamuka Glonti, the former producer at Maestro TV who took the initiative to the campaign group.

Trialeti is a cable operator and also has a license as private broadcaster, but the GNCC says Trialeti was broadcasting in a frequency range it had no license for and fined the company TV 5 000 lari (about USD 3 000).

The director of Trialeti said the fine was illegal and said he was ready for an inspection by the commission any time. As a sign of protest, Trialeti is not going to pay the fine.

In its statement Thursday, GNCC writes that it started checking satellite receivers on request of Trialeti, which suspected that another TV company called Dia had illegally installed some receivers. No violations were found with regards to Dia, only to Trialeti.

Another media outlet experiencing problems is Metskre Arkhi, a new TV company controlled by Bidzina Ivanishvili’s wife and run by his associates. Earlier, Metskhre Arkhi claimed its equipment had been damaged in customs. There has also been interference in installation of satellite receivers, Tamar Rukhadze, head of information at Metskhre Arkhi says.

“They install satellite receivers in the villages and soon a village population is calling to reinstall an already installed receiver, because they’re afraid to lose their job, or social allowance, or have other problems,” she says.

GNCC said the allegations about harassment of Metskhre Arkhi are groundless.

Global TV, a cable operator, is also having problems. They are being forced to remove certain foreign TV channels from their network.

Zurab Bazghadze, director of marketing and development of Global TV, said they had to remove TNT from their repertoire of channels. Global TV was asked to present documentation not generally for having this company on their network, but for each program TNT has.

“Our audience is astonished by why they cannot watch this or that channel, why there are problems. We have to explain them what’s happening.”

The statement by the commission says that the accusation about harassment over cable operators is also groundless.

“We once more explain that Georgian National Communication Commission never interferes in such private legal relations, because this is not within the frames of its regulating sphere.”

In its statement Thursday, GNCC writes that it started checking satellite receivers on request of Trialeti, which suspected that another TV company called Dia had illegally installed some receivers. No violations were found with regards to Dia, only to Trialeti.

Global TV, a cable operator, is also having problems. They are being forced to remove certain foreign TV channels from their network.