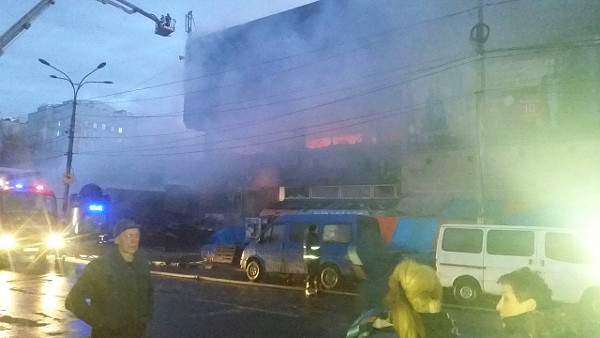 TBILISI, DFWatch–Thirty fire fighters in Georgia’s capital Tbilisi are trying to extinguish a massive fire that broke out Monday morning at a shopping mall near the city’s central railway station. The blaze has spread to surrounding buildings and engulfed several blocks in smoke.

The fire which broke out around 5am has completely destroyed the department store ‘Children’s World’ as well as surrounding booths mostly used by vendors of clothes, furniture and home appliances.

The burnt-out department store Children’s World was located in a large concrete building adjacent to Tbilisi’s central railway station, and next to an important street bazaar offering a wide range of products at affordable prices. According to reports, the blaze spread through to nearby shops as well as adjacent street booths and warehouses and did enormous damage to the bazaar. No injuries are reported.

Deputy Fire chief Davit Gelashvili said that the fire has spread to around 13,000 square meters, but is contained, as firefighters are focusing their work on separate spots.

The extent of the damage is immense, according to the Rescue Service.

“My compartment was totally destroyed. The goods I stored there cost more than 30,000 lari (USD 11 200). I am devastated and don’t know what to do now with the bank loans. I am asking the government to help us and compensate the damages,” one of the vendors said following the incident.

The cause of the fire remains unclear. Police have opened an investigation. Some vendors whose shops burnt down believe the fire was started intentionally, the purpose being to make way for new private properties in the high value location, they suspect.

“I believe someone set fire to the place intentionally. We know of such cases from before, when some investors built new buildings in the destroyed area. The same thing happened a few years ago with a furniture shopping centre. I ask the authorities to deal with it, because that was the only source of income for hundreds working here,” another victim said.