Margvelashvili: This is a great partnership, but I will always demand more

Margvelashvili: This is a great partnership, but I will always demand more 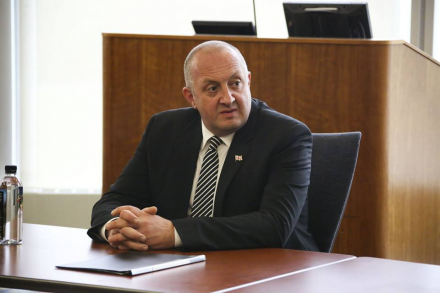 During his work visit to New York last week, President of Georgia Giorgi Margvelashvili spoke with the Voice of America about U.S.-Georgia relations and his views on the Trump Administration’s support for Georgia.

Ia Meurmishvili spoke with the President.  She anchors Voice of America Georgian Service’s weekly show Washington Today and can be followed on Twitter@iameurmishvili or on Facebook/ia.meurmishvili.

President Margvelashvili, what’s your view of the U.S.-Georgian relations under the current administration?

With the current administration, let me just register that our record has been pretty impressive. During this administration we have a budgetary bill, which specifies some of the most important issues for us, which is non-recognition of territories occupied by Russia. We have got the opportunity to increase defense cooperation and purchase some of very important weapons for our defense ability. We have a standing Georgia Support Act on the Hill. As President of the country and a strong believer that our bilateral relations are mutually beneficial, I will always demand more, but I would say that this is a great partnership.

What are your views on President Donald Trump’s recent statements on the U.S. role in the world?

I know there are issues that are discussed within NATO. But let me give you Georgia’s perspective on some of this. First of all, we are a country that is a very strong believer that we have to be more resilient and more equipped and more organized with a growing threat of the Russian Federation in the region and maybe even globally. We do believe that we should have more contribution and Georgia is fulfilling the benchmark of 2 percent and is even going further within these 2 percent; we are highly concentrated on purchasing the equipment and the machinery for defensibility. This is one thing.

The second thing is that we are a strong contributor to global security. I mean per capita, we are the biggest—let me underline, the biggest contributor in the world—to the [NATO-led] Resolute Support Mission in Afghanistan. So, per capita, we are standing really firm there with 870 men and women in uniform committing their lives to global security. We do believe in these values.

President Trump’s record on calling for stronger resilience, be it a stronger defensibility opportunities for NATO as well as nations applied to NATO, or be it a stronger economic independence for Europe, including vis-a-vis Russia, we have been basically in the same position for a long time, so we are happy with this. But we would want to get faster in both the EU and NATO. But that’s a different issue.

We often hear criticism of a lack of American leadership in the world, especially starting from the previous administration going into this administration. President Trump’s speech at the UNGA underlined once again that the U.S. is willing to retreat and concentrate on its own affairs at home. Do you think Georgia and other countries in the region are affected by in a way lukewarm attitude towards global engagement?

I would not go in discussing this or previous administrations, they are strong partners of my nation, so I do not want to go into nuts and bolts of discussing how or what are the priorities or what would be the best case scenarios for U.S. foreign policy leadership.

Let me just tell you that we always demand for more, and we’ve seen more [support] and a stronger stand, including vis-a-vis Russia, coming from the U.S. and motivated by the U.S. We have seen Ronald Reagan bring down the Iron Curtain to bring down the Berlin Wall. We have seen before U.S. strong stance on stability and global security, and those were the impulses that have determined the [outcome and aftermath] of the Cold War. So what we are looking for is for a stronger stand on this issue. And what we have seen before is a result of this strong stand; life has become more secure and more prosperous for United States for citizens of this country, as well as for the citizens of Europe and other countries so we are waiting for a more resilient and organized and strong stand that will probably just be generated from the United States but will be accepted by Europe, and will solve issues like Georgia and Ukraine.