Margvelashvili declares 2016 the Year of the European State

Margvelashvili declares 2016 the Year of the European State 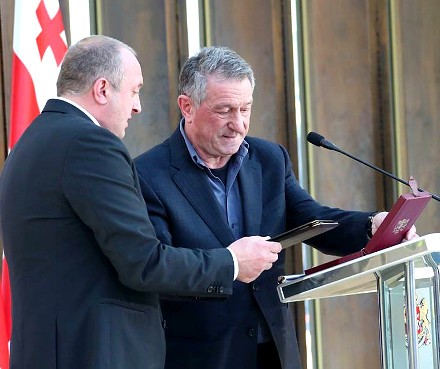 TBILISI, DFWatch–President Giorgi Margvelashvili on Monday declared 2016 as the Year of the European State.

He made the announcement at a ceremony to celebrate the 25 year anniversary of founding of the National Guard.

The president said in his speech that Georgia’s European choice remains the same as what was planned by previous generations, for which soldiers have sacrificed their lives.

“Therefore, I declare 2016 the Year of the European State, because the significant goals that we have to achieve will be strengthened, and steps will be taken forward exactly this year,” he said.

He congratulated the National Guard on the anniversary, saying that Georgia has strengthened its independence but has to achieve freedom.

“In 2016, we will see new goals; goals which offer new moments and preconditions for Georgia. From our independence, we must create the liberty of Georgia,” he added.

A year ago, Margvelashvili announced 2015 the Year of Women, on the background of many incidents of violence against women.

Tuesday, he posthumously awarded the Order of Queen Tamar to Irine Enukidze, the deceased mother of Sandro Girgvliani, a young bank employee who was murdered in 2006.

Enukidze received the honor because of her contributions to the country and the nation.

“She has become a symbol of the fight for humanity, for human rights and against violence.”

The award was received by her husband Guram Girgvliani.