Man stabbed to death near Telavi

Man stabbed to death near Telavi 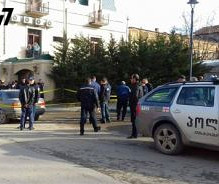 TBILISI, DFWatch–A man of about 50 years was murdered on Wednesday in the village Vardisubani near Telavi. A suspect was apprehended the same day.

The victim, Vepkhia Glurjidze, had a disagreement with the suspect, who then stabbed him. Glurjidze took a taxi to a hospital, but died on the way. The taxi driver is being questioned by police.

The Ministry of Internal Affairs (MIA) said police in Telavi have detained a suspect, who has a prior conviction. He stabbed the victim and went into hiding, but the police found him several hours later. According to the MIA, the detainee pleaded guilty.

Interpressnews quoted the mother of the victim saying that her son had had a conflict with the suspect, a neighbor of his, for a long time. She claims that the neighbor was attracted to the wife of her son and he had been threatening their family for a long time, which she believes was what Wednesday’s conflict was about.

MIA, however, says that the suspect seems to suffer from psychological problems.