Man sentenced to 20 days in jail for beating cameraman

Man sentenced to 20 days in jail for beating cameraman 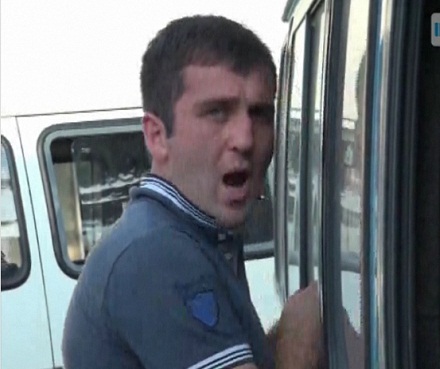 20 days for hooliganism. This video frame is taken from Davit Chavleishvili's camera just seconds before the unknown man in the picture attacked him. (info9.)

TBILISI, DFWatch – Police have arrested a man accused of beating a cameraman working for an opposition affiliated media outlet.

The man has been sentenced to twenty days in jail.

The incident took place August 15 in front of the municipality building in Lanchkhuti. Info9 cameraman Davit Chavleishvili and a journalist were making a report about a minibus parked there, which they suspected was preparing to bring public employees to a campaign rally for the National Movement, something which has happened before.

The journalist was inside the minibus asking passengers where they were going when a man approached her and started shouting that she must stop. Then the man saw the cameraman and hit him. The camera was damaged and Chavleishivli received an injury to his forehead.

The interior ministry on Saturday released a short statement saying that Zurab Kvirkvelia had been arrested for beating the info9 cameraman.

Local media later reported that Zurab Kvirkvelia is the husband of a local police employee in Lanchkhuti and he is also a coordinator of the National Movement’s local branch.

Shortly after the incident a group from info9 went to the local police and could report that an investigation had been launched under section 154 of the Criminal Code, which is about interrupting a journalist in his or her work. But the interior ministry says Kvirkvelia was convicted of violating the administrative law, and an article about petty hooliganism. He was sentenced to 20 days in jail.

But the Criminal Code punishes such action with a fine or up to two years in jail, and also three years suspension.

The incident is the latest in a series of attacks on journalists. All over Georgia, reporters have been beaten, had their equipment taken away, and been denied to some meetings by officials, as well as a mysterious phenomenon of journalist stalkers calling themselves media groups. The stalkers seem to not be after capturing anything important to the cameras and recorders they carry, but continue to follow opposition affiliated journalists around apparently in order to disturb them while they are working.

Law enforcers have not prosecuted anyone for interrupting a journalist’s work. The only cases have been based on hooliganism after a journalist was physically beaten. The result is that in all other cases, that do not involve physical beating, the interference in the media has been allowed to continue, despite a number of appeals from media outlets and the ombudsman.