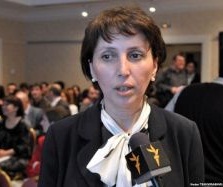 TBILISI, DFWatch – The inter-agency commission tasked with monitoring the election process calls on local governments not to place party symbols in their offices, as this is a violation of law.

Tamar Kintsurashvili, a member of the commission, said on Monday that the commission has learned about several cases of campaign posters for the ruling party and signs with “5” – its number on the ballot – being placed inside different administrative buildings.

The commission considers this a misuse of administrative resources for campaigning purposes. This is a violation of the election legislation carrying a penalty of a 2 000 lari fine, or about USD 1 220.

It is the prerogative of the Central Election Commission to prepare a protocol of administrative violations, but since the inter-agency commission has as one of its tasks to prevent law violations, they appealed to local governments and government bodies with a recommendation to abstain from placing campaign material in public offices.

The recommendation says that the commission calls on those bodies to inform their employees that placing party symbols and posters in a public office is a violation of the election legislation. They will also have to check in practice whether such placement is taking place in their offices and to prevent it.