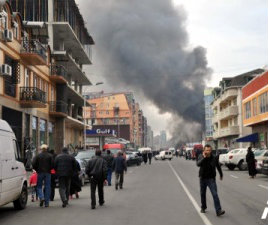 TBILISI, DFWatch–A man who was injured in a fire at a market in Batumi died in hospital Sunday night. Police have detained one person in connection with the fire.

Davit Putkaradze, 51, was owner of one of the shops at the market. According to local media, he had lung problems and became unconscious due to the smoke from the fire.

The fire at the so-called Khopa market resulted in the death of a wife and husband. Five people were questioned at the police station in Adjara, while several of the owners and sellers at the market are still being questioned.

Their relatives remain at the police station. The Interior Ministry is investigating the case on suspicion of causing damage or destroying property. Shops covering an area of about 600 square meters were burnt in the fire.