Locals rescue two youth from the snow after avalanche

Locals rescue two youth from the snow after avalanche 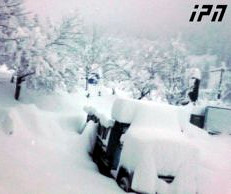 The two youth were caught by an avalanche in the village Bodzauri. (Interpressnews.)

TBILISI, DFWatch–Two young people were pulled out of the snow alive Monday evening after being caught by an avalanche in a mountainous part of Georgia’s Adjara region.

Locals helped the two survive the ordeal. They did not have life-threatening injuries but were taken to hospital.

The head of Khulo municipality told Interpressnews that the avalanche struck at a time when there was clean-up work ongoing in the village Bodzauri.

“The youth were standing near the car, waiting for the road to be cleared when the avalanche came and covered them,” Besik Bauchadze said.

There were at least five avalanche reports in Adjara on Monday, most of them in Khulo municipality. No-one else was injured. Many villages are experiencing cut off roads and no power supply.

Georgia’s Road Department has made it mandatory for cars without four wheel drive to use snow chains in the mountainous parts of Adjara.