Locals in Terjola threaten to start protests against Jehovah’s Witnesses

Locals in Terjola threaten to start protests against Jehovah’s Witnesses 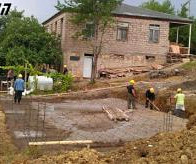 TBILISI, DFWatch–Jehovah’s Witnesses in Georgia claim that they are being discriminated against on religious grounds in Terjola, western Georgia.

The conflict started about a year ago. Locals Orthodox Christians are against the construction of a new Kingdom Hall close to a school because it will ‘influence the children.’

In June, locals protested against the new house and the local government decided to halt construction work.

Jehovah’s Witnesses then sued the town administration (gamgeoba) in Zestaponi Court and won. The decision is not enforced yet, as the gamgeoba is preparing to appeal.

The gamgeoba said there is unlikely to be any conflicts about the prayer house, but Jehovah’s Witnesses lawyer Manuchar Tsimintia said they received a threatening letter on April 21. The letter was from locals who warn of massive protests if they continue building the house and that Jehovah’s Witnesses will be held ‘responsible.’

Head of Saint George’s Church in Terjola, Spiridon Tskipurishvili, claimed that someone is trying to provoke a confrontation and make it look like church leaders are persecuting Jehovah’s Witnesses in the eyes of international organizations.

The gamgeoba has offered Jehovah’s Witnesses a different location for the hall and also offered to mediate in the conflict.

Jehovah’s Witnesses has been threatened and attacked numerous times in Georgia, and according to human rights workers the authorities are rarely prosecuting such incidents.