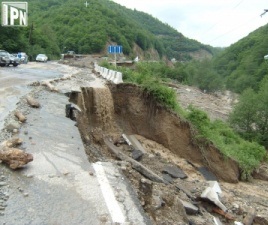 TBILISI, DFWatch – Georgia was hit by a storm Thursday that killed livestock and injured eighteen people and caused flooding in the capital.

Local media in the eastern region of Kakheti report that heavy rain was followed by a hail storm, causing difficulties for thousands of people.

Houses were flooded, roofs blown off, walls collapsed, almost all the harvest is destroyed, livestock is dead, roads are blocked and electricity lines are damaged.

“The storm started at four in the morning. Everything was collapsing. We were throwing children out of the window and the others hold them down, we just made it out in time, we could have drowned in there,” one of the locals told Kakheti Information Center, ick.ge. 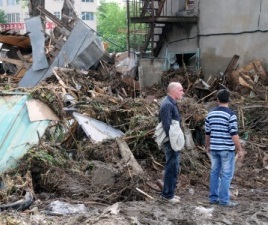 Telavi, the center of the eastern Kakheti region. (IPN.)

Another local Giorgi Danelishvili remembers the roof flying off, destroying everything in his yard. He is 75 years old, and says he has not seen anything like this.

18 people were injured in Telavi, most of them from being cut by broken glass. No-one was seriously injured. One of the patients is a woman with a broken leg, and another woman had suffered a stroke.

A local correspondent reports from Teleavi that the storm damaged one of the hotels where a group of Bollywood actors are staying. They have arrived in Georgia to work on a new movie.

The Emergency Service in Tbilisi reports that water was pumped out of up to 90 places.

On orders of Georgian President, a disaster headquarter has been set up.

A government session was held today in Telavi instead of Tbilisi to look at the damages the storm has made.
Images from Interpressnews: