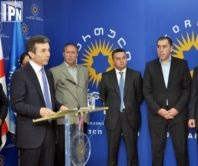 Bidzina Ivanishvili (left) nominated several non-politicians, while some politicians will concentrate on campaigning and not be candidates 'because of a massive workload'. (IPN.)

TBILISI, DFWatch – Bidzina Ivanishvili Thursday announced the names of all ten majoritarian candidates for Tbilisi and several candidates in the regions.

This time his opposition Georgian Dream coalition brings forth many popular names. Some of the candidates named are newcomers in politics, but popular in another sphere of activity.

According to Georgian legislation, 73 majoritarian candidates should be elected in the country, ten in Tbilisi.

There are ten election districts in Tbilisi. Georgian Dream’s candidates for Tbilisi are the following: Mtatsminda district – actor Zaza Papuashvili; Vake – the well-known lawyer Shalva Shavgulidze, Saburtalo – the well-known lawyer and politician Davit Usupashvili, who is a head of Republican Party; Krtsanishi – well-known sportsman Shota Khabareli, who is an Olympic judo champion and former coach of the national team; Isani – director and professor Nukri Kantaria, who is one of the founders of Georgian Academy, Samgori – Zurab Abashidze, one of the leaders of the Free Democrats Party, and currently a member of Tbilisi City Council; Chughureti – Viktor Dolidze, who is one of the leader of the Free Democrats, also member of Tbilisi City Council; Didube – Vakhtang Khmaladze, constitutional expert and a member of the Republican Party; Nadzaladevi – Tea Tsulukiani, legal expert, who for years worked as a lawyer at the European Court of Human Rights in Strasbourg, currently she represents the Free Democrats, Gldani – actor Soso Jachvliani.

When it comes to the regions, Georgian Dream’s majoritarian candidate for Ambrolauri will be economist and lawyer Giorgi Nachkebia, for Martvili – football player Murtaz Khurtsilava, Khoni – engineer and lawyer Nika Sanodze, Chiatura – doctor Malkhaz Tsereteli, Sagarejo – Tina Khidasheli, well known lawyer and politician. She is one of the Republican Party leaders.

Georgian Dream has so far named 68 of their candidates. As for the rest of the regions — Akhalkalaki, Tsageri, Ninotsminda, Zugdidi and Marneuli – these candidates will be announced in next few days.

Ivanishvili noted that several among the Georgian Dreams political leadership have not been nominated as majoritarian candidates. They will instead continue their activity at the headquarters. These are Davit Saganelidze, well-known politician who for years represented the New Rightists Party, but recently said he did no longer share their political views and was planning to leave the party, which he finally did after Georgian Dream was created.

Others include Davit and Levan Berdzenishvili, well-known brothers representing the Republican Party, also Davit Zurabishvili from the Republicans, Giorgi Tsagareishvili, who represents the Free Democrats in parliament, Kakha Shartava from the National Forum and Revaz Shavishvili from the same party, Gogi Topadze, leader of the Industrials, also former ombudsman Sozar Subari and spokesperson for Georgian Dream Maia Panjikidze.

Leader of the coalition says the headquarters have a massive work load during the election campaign, that’s why many well-known politicians, who would most likely have been political heavyweights had they been nominated, will remain at headquarters on his request.

“These people may be particularly appreciated, as politicians very often have an ambition to become a majoritarian, but they put aside their ambitions and I want to thank them. The experience of these people will serve the common interest,” Ivanishvili explained.