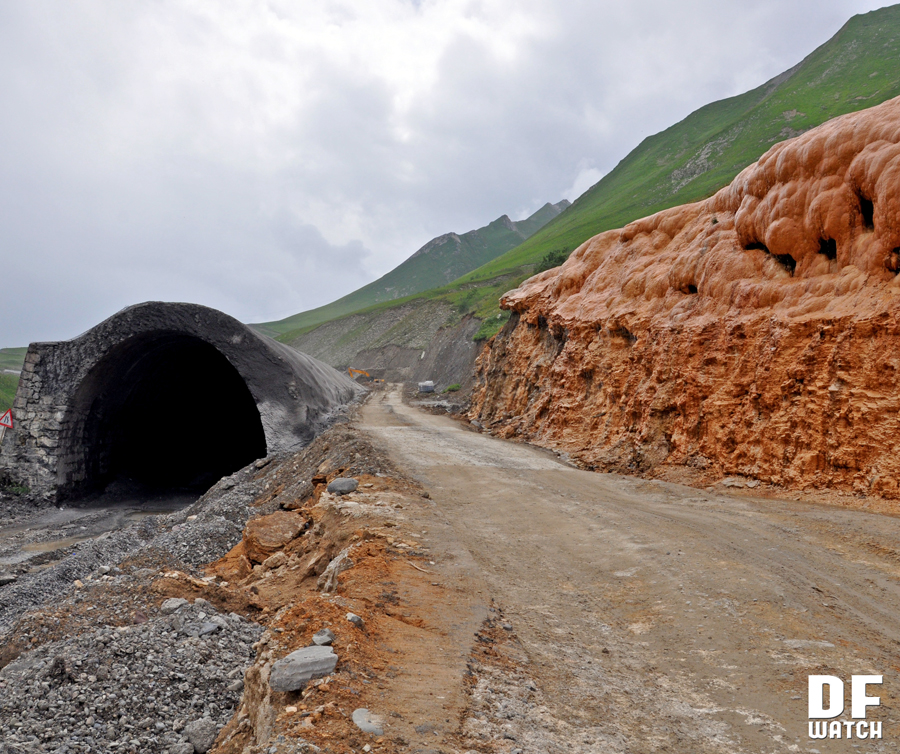 A construction company needed an access road and cut through the limestone. Environmentalists say it will take centuries for the rock to reform. (DFWatch.)

TBILISI, DFWatch–A large part of a massive limestone formation in Georgia has been destroyed during repair work on a tunnel.

The rock formation is located at a section of road between Gudauri and Kobi, leading up into the Kazbegi mountains in the north of Georgia, and is of the form called travertine, which is deposited over decades by hot and cold mineral springs.

The place is a tourist attraction, and travelers stop here to take pictures and taste the water from the natural springs.

But today, a several meters wide section of the impressive rock is missing, and instead there is a newly built dust road. While repairing a tunnel built many years ago, the construction company Mamisoni cut through a section of the limestone in order to build an access road for workers.

Specialists say it will take centuries for it to grow back.

In May, the first reports came about the geological phenomenon being destroyed. People organized through social networks and held a protest rally outside the old parliament in Tbilisi.

After the protests grew, workers halted the destruction and continued work without inflicting further damage. But according to environmentalists, about a hundred years is needed to form a one centimeter layer of this kind of limestone.

The group Green Alternative called for bringing those who were responsible for the destruction to justice. But so far, no-one has been punished.

Deputy Infrastructure Minister Shota Murghulia in mid-June explained to journalists that the tunnel hasn’t been repaired for the last 25 years, and during this time, the limestone has expanded and covered the tunnel’s surroundings.

Another problem is that the site has not been granted natural heritage status. The commission to review protected areas a few years ago defined 100 locations which were granted national heritage status, which gave them legal protection and required permission before doing anything destructive in those areas. But the previous parliament assembly failed to review and pass a draft law on protection and management of natural heritage.

Goga Khachidze, minister of environment in the previous government, said in an interview on Georgian Public Broadcasting that there were some problems that led to this rock formation not being given status as heritage. But it didn’t happen on purpose, he added.

“But still, what happened there is destruction of a natural monument,” he said. “It didn’t have heritage status, but I’ve checked and this particular spot is on the list of Georgia’s first Red Book.”

“If there is no paper saying that this is a heritage, it doesn’t grant anyone right to go there and destroy it.”

The area still remains an attraction for passers-by and tourists often stop here on the way to Kazbegi, a national park in the Caucasus mountain range.