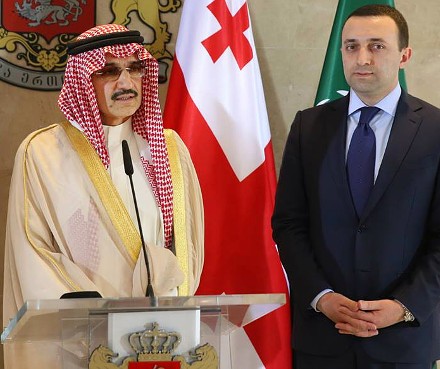 After meeting the prime minister, he said that he feels honored arriving in Georgia and discussing the economic situation.

The prince said there is an opportunity to bring the two states closer and develop relations.

Prime Minister Irakli Garibashvili said after meeting with the prince that Abdulaziz Al Saud plans to send a delegation to Georgia which will start working on specific projects to invest in.

The prince arrived in Tbilisi on Wednesday by invitation of the prime minister. The same day, President Giorgi Margvelashvili granted him honorary citizenship of Georgia. The PM handed him a decree and a medal.

“We discussed Georgia’s potential and we think we should strengthen relations,” the PM said, adding that they also discussed tourism.

In the first four months of 2015, the trade turnover between Georgia and Saudi Arabia was USD 1.58 million.

According to the most recent data from Forbes, the prince owns more than USD 22 billion.

Georgia and Saudi Arabia established diplomatic relations in May, 1994.

In February last year, Georgia opened an embassy in Riyadh, the Saudi capital.