Legitimacy of Georgian election may be questioned

Legitimacy of Georgian election may be questioned 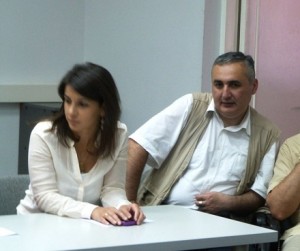 TBILISI, DFWatch – A democracy campaign in Georgia says recent developments may put in doubt the legitimacy of the whole election if the Saakashvili regime does not take immediate measures.

The campaigners are particularly alarmed by the recent court ruling against opposition billionaire Bidzina Ivanishvili to pay a fine of 148 million lari for having illegally used his companies for election purposes. The ruling was yet another chapter in a long series of legal troubles he has faced since moving into politics in October 2011.

This Affects You Too, as the campaign is called, calls on the Chamber of Control (CoC) to end its subjective approach and be truly objective in its work monitoring the financing of politics, and only make decision on the grounds of documents and evidence.

The organizations are appealing to the president to take measures to provide for a fair and transparent environment during the election year and to provide for a diverse and accessible media.

“In other case we consider the legitimacy of the upcoming parliamentary elections can be under question.”

Considering the recent incidents of harassment on journalists and media organizations, the campaigners call on the prosecutor’s office to study these cases and carefully investigate all incidents.

They also appeal to something called the inter-agency commission, a new government body ostensibly formed to ensure a fair election environment.

Right now, one of the campaigners’ primary concerns is the almost total dominance of strongly pro-government TV channels nationally, that spend most news broadcasts on passively relaying President Saakashvili’s political speeches and media events, while being critical to and sometimes undermining the credibility of Saakashvili’s opponents by offering speculative theories.

Channel 9, which is affiliated with Ivanishvili, has been unable to get national distribution yet, and one of the fines issued to the businessman was because he distributed satellite receivers around the country so the population could watch “his” TV channel. About 20 percent of Georgians have access to satellite TV. Except from a signal relayed by Turkish satellite company Turksat, the only way Channel 9 currently gets out to people is through a cable company owned by Ivanishvili’s brother, Global TV, and via the Internet.

Campaigners have offered a set of law amendments that might help to overcome what they argue are shortcomings in the media environment.

They want to introduce the principles of ‘must-carry’ and ‘must-offer’ and say it will provide accessible and diverse media all over the country.

Almost all political parties which are currently active support their initiative, except the ruling party, the organizations say. In fact, the National Movement didn’t say they were against it, but just failed to respond.

“I can’t remember any other case when there was such a common spirit among political parties, when all support and request the same, this is an exception,” Lasha Tughushi, co-author of the alternative amendments and editor of daily newspaper Rezonansi says.

The organizations are in constantly ongoing talks with lawmakers about the issue.

But they seem to not have much luck convincing the governing party. Tamar Chugoshvili, chair of Georgian Young Lawyer’s Association, says the reason is political, but that ruling party lawmakers argue against it on the grounds that introducing those principles will be interference in private business, as cable companies and private media companies will have certain obligations.

Irakli Melashvili from Coalition for Free Choice says this is a ridiculous argument, because the government already interfered in private business by forcing TV stations to show free political commercials.

Tughushi says there are examples of developed countries where there was the same kinds of problems, but these principles were introduced and it worked out well.