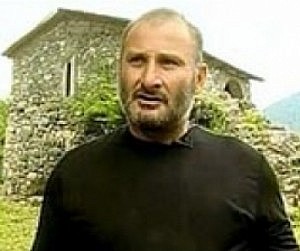 TBILISI, DFWatch–A former warlord who was sentenced to 12 years in jail last November, was Wednesday released after entering a plea agreement.

Emzar Kvitsiani, who was convicted of leading the mutiny in Kodori Gorge in 2006 and for setting up an illegal paramilitary group, was detained at Tbilisi airport in February, 2014 as he returned to Georgia after being wanted since 2006.

Kvitsiani was trustee of Kodori Gorge, a part of Abkhazia which remained under the control of the Georgian authorities after Abkhazia War of 1992-93, due to informal agreement between Abkhaz separatists and paramilitary group of Kodori inhabitants, headed by Kvitsiani.

However, this control was only nominal, as Emzar Kvitsiani used to have a strong grip of the mountainous area inhabited by Svans, a Georgian highlander ethnic subgroup with its distinctive language and culture.

Kvitsiani, who ran a 200 men strong paramilitary group, Monadire, or The Hunter, used to enjoy full support of then President Eduard Shevardnadze.

In late 2005, during Mikheil Saakashvili’s presidency, the position of president’s trustee in Kodori was abolished and his group Monadire was ordered to disband. But Kvitsiani disobeyed the government. Special forces then conducted an operation in early 2006. It was a joint operation between the Georgian army and special forces of the Ministry of Internal Affairs. They disarmed the paramilitary group, but Kvitsiani himself managed to escape to Abkhazia and then to Russia until returning to Georgia in 2014.

Being accused for military mutiny and organizing a terrorist attack Kvitsiani was sentenced to 12 years in jail.

The Appeals Court in Kutaisi, Georgia’s second largest city, on Wednesday released Kvitsiani as a result of a plea agreement.

Kvitsiani’s lawyer Lekso Kobaidze told journalists that the agreement, which was signed a few days ago, does not entail that Kvitsiani admits guilt. Nominally, the charges haven’t been dropped and the parties agreed to 11 months’ detention, the time Kvitsiani has already been in jail.

“January 28, it will be eleven months and four days since Emzar Kvitsiani was detained. We don’t admit guilt,” he said, adding that the Prosecutor’s Office offered Kvtisiani to sign the agreement four days ago.

The National Movement rushed to criticize his release and accused the current government of eroding the pillars of statehood.

Public opinion in Georgia is divided in its view of Kvitsiani. Many respect him as a savor of a part of Abkhazia after the bloody war in the early 1990s, while others invoke the nasty years after the dissolution of the Soviet Union, when during several years Georgia was torn apart by rival paramilitary groups.

This dichotomy is evident along the political division, with many members of the current ruling Georgian Dream coalition espousing the former narrative, while the UNM and its supporters mostly see Kvitsiani as an epitome of the lawlessness that looms over Georgia again, thanks to unwise rule of the Georgian Dream.