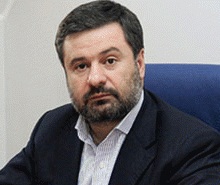 TBILISI, DFWatch – The new TV station being established by people around Georgian opposition financier Bidzina Ivanishvili is being sued.

It’s called Igrika and was recently bought by a company which is owned by the wife of Bidzina Ivanishvili, the billionaire who has said he plans to run in the election this fall and then form a government.

Rustavi Media Management Company (RMMC) released a statement today saying it had filed a suit against Igreka, because of damage to personal property.

RMMC is owned by Erosi Kitsmarishvili. The reasons for the lawsuit are unclear. DFWatch tried repeatedly to contact Mr Kitsmarishvili Wednesday evening, but his only comment was: “Keep watching”.

But it is likely to be related to the fact that Igrika belongs to Ilia Kikabidze. Apart from that, he is (or according to Kitsmarishvili, was) general director of Maestro, a TV station which currently is in a protracted feud to which Kitsmarishvili is one of the parties.

The other party to the conflict is the journalists and techincal staff, who have fled to a radio studio and are continuing to broadcast from there, while Mr Kitsmarishvili has control over the main studio building, where most of Maestro’s equipment is. Much of the dispute revolves around this equipment and who has a claim to it.

According to a statement released by Kitsmarishvili, Rustavi Media Management Company, which he is head of, is going to court to demand the seizure of Igrika. All 100% of the shares in Igrika were recently sold to Aktsepti Ltd for 20 000 lari.

Director of Igrika was Lasha Shonia until December, and then Kakha Kobiashvili took over. The latter is also director of Aktsepti, a company in which 80% of the shares are owned by Ekaterine Khvedelidze, wife of Ivanishvili. Aktsepti has also bought management rights over Igrika until December 31, 2013, which effectively puts the TV station in the control of the Ivanishvili household.

Ivanishvili’s lawyers recently confirmed the businessman’s associates are going to set up a new TV company, but the staff, name and other details are not yet known.

A spokesperson for one of the political parties affiliated with the tycoon confirmed that technical equipment is being brought in to Georgia to be used in producing television.

Igrika received a license for satellite broadcasting on December 23, 2011.