Landslide victory for the government coalition in Tbilisi local election

Landslide victory for the government coalition in Tbilisi local election 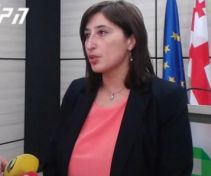 TBILISI, DFWatch–The government coalition’s candidate for Tbilisi mayor will get 72.7 percent of votes, according to  preliminary results from the Central Election Commission (CEC) in Georgia.

Presenting the results Sunday night, CEC head Tamar Zhvania told journalists that results from 248 precincts have been counted, out of a total of 727 precincts.

The runner-up Nika Melia from the National Movement has 27.3 percent.

In Poti, the Georgian Dream candidate received 71.8 percent of votes. He was running against a candidate from the Alliance of Patriots.

Newly elected mayor Davit Narmania says his plans for Tbilisi will be to do structural optimization. He also said there might be staff changes at City Hall and promised to bring in professional and qualified people.

He continued saying that as a citizen living in this city, he wishes Narmania success and will be happy if Narmania fulfills all the promises which he generously gave during the campaign.