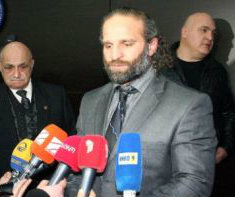 TBILISI, DFWatch–A Georgian wrestler and double Olympic bronze medalist on Tuesday became a member of parliament. Luka Kurtanidze will be replacing Tamaz Avdaliani, who recently passed away due to illness.

Eldar (Luka) Kurtanidze is on the same party list, that of the Georgian Dream coalition, and after two weeks agreed to take the mandate.

Parliament confirmed the replacement at a plenary session on Tuesday with 96 MPs voting  in favor.

Kurtanidze was leader of the Georgian Wrestling Federation from 2012 to 2014. He is twice world champion and five times European champion in free style wrestling.

In 2010, he joined Nino Burjanadze’s Democratic Georgia and participated in anti-government demonstrations in May, 2011, which were violently dispersed by the Saakashvili regime.

In the 2012 parliamentary election, he joined the Georgian Dream coalition and ran as a majoritarian candidate of Lagodekhi, but lost to the candidate of the National Movement.