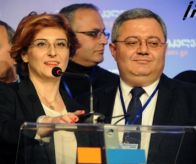 TBILISI, DFWatch–The Republican Party, which is member of the Georgian Dream coalition, Sunday elected a new leader at a party congress.

The party elected Khatuna Samnidze as new leader. She has been a party member since 2005 and has served as organizational secretary.

Samnidze thanked the members for their support.

“I will continue the policy of this party. Every decision will be made after broad discussion and together we will continue to develop our party, to be a more active member of the coalition and to prepare for the local elections,” she said.

Outgoing leader Davit Usupashvili, who is Speaker of Parliament, congratulated her and said he is very satisfied with the decision and is sure that Khatuna Samnidze will move the party forwards.