Kerry to visit Tbilisi on July 6

Kerry to visit Tbilisi on July 6 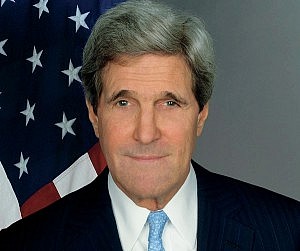 TBILISI, DFWatch–U.S. Secretary of State John Kerry will come to Georgia and have talks with leaders and opposition, before heading for a NATO summit in Warsaw which begins July 8.

Prime Minister Giorgi Kvirikashvili announced Kerry’s visit on Thursday during a dinner held at the U.S. embassy in Tbilisi dedicated to the 240th anniversary of U.S. independence.

Kvirikashvili said he was very pleased about the upcoming visit.

“This will be further proof that the U.S. firmly supports Georgia’s Euro and Euro Atlantic integration before the NATO summit,” he told journalists.

The PM did not specify the date of Kerry’s visit, but RIA Novosti quoted the government’s office saying it would take place on July 6. In Washington, State Department spokesperson John Kirby confirmed that the U.S.’s top diplomat will visit Tbilisi on Wednesday next week; two days before a NATO summit begins in Warsaw.

Kerry will meet with the prime minister to discuss a wide range of issue, Kirby said, including the support for Georgia’s integration with Europe and upcoming parliamentary election in October. The secretary of state will also meet with the Georgian president and leaders of opposition parties.

After his visit to Georgia, Kerry will go to Ukraine, and have talks with the president and prime minister there about the reform progress and the Minsk cease-fire agreement for eastern Ukraine.

Secretary Kerry will then attend the NATO summit in Warsaw, Poland, on July 8-9, where a plan for larger troop deployments in Eastern Europe is expected to be formally approved. A plan dubbed “28+2” has also been discussed, to offer Georgia and Ukraine a new form of relationship with the alliance called association partnerships.

In February 2014, it was announced by the Georgian foreign minister that Kerry would visit later in spring that year, but the visit never materialized.