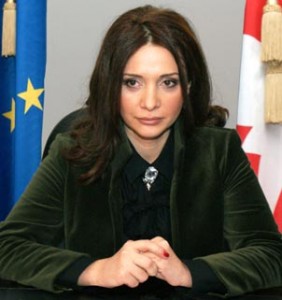 Prison minister Khatuna Kalmakhelidze orders Georgia's prisons to raise the limit on number of inmates, despite a warning from the country's ombudsman that overcrowding is causing serious problems.

TBILISI, DFWatch – Prisons in Georgia are to become more crowded, as the maximum limit on number of inmates is raised, and two prisons are closed down.

It’s the controversial Minister for Corrections and Legal Assistance, Khatuna Kalmakhelidze, who has ordered the increase, which is already in force. All in all, the allowed number of prisoners has been increased by 1 500.

This comes despite a recent warning by ombudsman Giorgi Tugushi who called for a reduced a prison population, and identified overcrowded prisons as an important problem in the field of human rights in Georgia.

Kalmakhelidze’s decision is likely to worsen the already deplorable conditions in Georgia’s prisons, which is described in detail in the 2011 annual report of the ombudsman.

The move causes concern among lawyers and organizations working in the field. Defense lawyer Gela Nikolaishvili told the newspaper Rezonansi “if until today there were one or two persons in a place, from now there will be 5 or 6”.

One of the most serious problems is infectious diseased, particularly tuberculoses, which kills several tens of prisoners every year.

The prison health service is poor, and the exact number of deaths due to tuberculosis is uncertain, because there have been cases where the prisoner is submitted to a civilian hospital shortly before his death. This results in the death not being registered in the statistics as a prison death.

There have also been media reports about suspicious deaths in prison, which has led to periodic protesting. These incidents have been striking in that the public has been met by a wall of uncommunicative behavior from the government, and Mrs Kalmakhelidze in particular. As reported by DF Watch, the prison minister recently lied about her whereabouts to divert a crowd of protesters and journalists.

Last year, the minister claimed in a speech to parliament that she welcomes journalists to come and look at the prisons, but she has refused all journalists, both domestic and foreign, access to Georgia’s prisons, except for a few rare media tours.

About 150 prisoners died in prison from 2011 to 2012; a high number considering the size of the country.

Broken down for each prison, the changes are the following:

Limit for prison #1, located in Tbilisi was 750 for placement of accused and arrested. It increased to 1086.