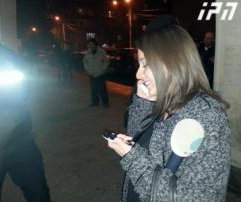 Journalist Nini Metreveli and her cameraman were detained by private security at Sports Palace. (Interpressnews.)

TBILISI, DFWatch–A journalist was detained by organizers of a concert by the Russian singer Grigory Leps on Sunday. The incident led to a protest rally.

Maestro TV journalist Nini Metreveli and her cameraman were locked up in a room with a guard for asking the singer a political question before the concert, which took place at Sports Palace in Tbilisi. After an hour and a half, Maestro’s news producer came to Sports Palace and they were released.

Grigory Leps is a friend of Vladimir Putin. After the annexation of Crimea he expressed complete support for the Russian president in an interview with life-news.ru.

“I am a citizen of my country. I respect President Putin and I think all he does is right. I trust him and value him,” he said. “The issue of what happened in Crimea, wthether I support it or not, is two-sided, but I think owning the Crimea peninsula is quite beneficial to Russia. If the president decided so, that is how it must be.”

The Maestro journalist asked Leps about his statement, if he felt uncomfortable saying it, but the singer said no.

Nino Zhizhilashvili, news producer at Maestro, told DF Watch that the journalist asked questions that had not been agreed beforehand with Leps’s producer.

“There wasn’t an official agreement. We never sent questions in advance, but shortly before the interview, the journalist spoke with the producer, who advised to ask general questions to Leps. The journalist didn’t promise anything and asked the question she felt was right,” Zhizhilashvili explained.

Journalist Nini Metreveli says they were ordered to delete the recording.

“They threatened that the recording must never make it onto TV. I explained that the questions which I asked were selected due to the public interest.”

Maestro filed a complaint about the incident, and the organizers of the concert are now under investigation for deprivation of liberty, which is punishable by up to four years in jail. Police questioned Nini Metreveli.

“The journalist was never interrupted in her work. She organized a provocation,” the concert’s organizer Lela Aslanikashvili says, adding that there had been a warning from the Russian producer not to ask the singer political questions.

One of the co-owners of the TV company Maestro is businessman Kote Gogelia, who also does business in Russia. He is the 30th richest person in Georgia with assets worth USD 55 million. The businessman started accumulating wealth after moving from Georgia to Russia. He had been living in Switzerland for a while with his family. Now he owns the company Progerta, the branches of which are in Novorossiysk. He also owns another company called Komanditservis, which produces coal. He owns several casinos in Russia. Russian media writes that Gogelia was successful in getting ahead in this quite difficult field in Russia through friendship with high ranking officials in Russia, including Putin.

Several Tbilisi NGOs that are against Russia’s actions rallied against Leps on Sunday. They organized a ‘corridor of shame’ for the audience who attended the concert.

Organizers said no one has right to attend the Leps concert as he is a close friend of Putin and is on the U.S.’s black list for having ties with the mafia. Attending his concert means disrespect to the heroes who sacrificed their lives for the unity of Georgia, they argue.

“First they bomb us, then send singers for us to applaud. We want to send a message to people not to fall for the enemy’s tricks,” rally organizers said.

Lela Aslanikashvili, one of the organizers of the concert, claims that Leps never put his signature on a statement in support of the annexation of Crimea. She said there was another person with the same surname who signed it, someone from the Russian Academy of Sciences.

Grigory Leps, or Grigol Lepsveridze, is of Georgian origins and was born in Sochi, Russia. Media often report that that he has had issues with drugs and alcohol.

He first became popular in Moscow by singing in restaurants. Some of his singles were quite popular among so-called thieves-in-law, or the mafia world.

This was his first concert in Tbilisi. Organizers claim that 95 percent of the tickets were sold. Prices ranged from 20 to 185 USD.