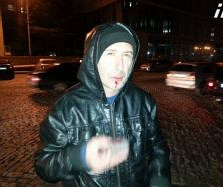 TBILISI, DFWatch–A photo journalist was beaten at a political demonstration in Tbilisi on Wedneday.

Irakli Gedenidze, who works for new agency Interpressnews, came to Roses Square to cover a rally against the falling lari rate organized by the Reformers, Free Georgia and the Christian-Democratic Movement.

One of the demonstrators accused Gedenidze of provocation and attacked him. The journalist, whose camera was also broken, was taken to the hospital. According to the doctor treating him, he does not have serious injuries.

“I was shooting the preparation for the rally and someone didn’t like he was in the frame. He was sitting in the car,” Gedenidze told journalists.

He said that the man started a verbal confrontation, while others joined him afterwards and beat the reporter.

Info9.ge released a video of the beating which shows that the man who is seen beating Gedenidze later sits down in a car which has attached the banner of Free Georgia.

After gathering at Roses Square, protesters marched up to the business center of former Prime Minister Bidzina Ivanishvili in a hillside above the capital.

Free Georgia, one of the groups behind the rally, posted a short statement condemning violence, “moreover against a journalist” who is fulfilling his own duties.

“Violence against reporter Gedenidze is particularly worrying as he was a victim of political repressions by the previous government,” the statement reads.

Free Georgia apologized to Irakli Gedenidze, promising that the party will ‘establish control’ to exclude such violence in the future.

Gedenidze has been the personal photographer of Mikheil Saakashvili when he was president. He was one of four photographers detained in 2011 during the previous government, accused of being spies.