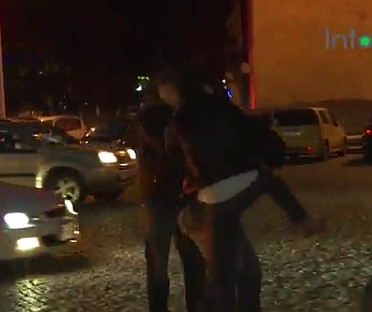 TBILISI, DFWatch–Police in Georgia have detained a suspect after Wednesday evening’s attack on a photo reporter during an anti-government demonstration.

Photographer Irakli Gedenidze from Interpressnews was beaten and had his camera damaged while covering a demonstration against the government’s economic policy.

He received treatment at a hospital for mild injuries.

A video published by Palitra showed how two persons cooperated on the attack; one man with cap and glasses holding Gedenidze, while a younger man beat him.

Police announced Thursday that a 21 year old man had been detained for the beating. It emerged later in the day that the older man seen holding Gegenidze in the video is a board member of the Free Georgia party and father of the man now detained for beating a journalist.

Moreover, the Free Georgia board member insists that it was the journalist who provoked the incident by recording his son with his camera while he was preparing for the rally.

The detainee is charged with illegal interference in a journalist’s professional tasks, a crime punishable by up to 2 years in jail, while the assault theory the police was initially working along can only lead to a fine of up to 2,000 laris (USD 1,000) or community service.

The 21 year old is also charged with damaging another person’s property.

Free Georgia first sent out a statement condemning the attack and apologizing to Gegenidze, promising stricter controls within its ranks to prevent further attacks.

After it became known that the accomplice in the attack is one of its board members, party leader Kakha Kukava said that the board member will be dismissed from the party.

“We cannot justify what we have been condemning for ten years.”

Like much of the Georgian opposition, Kukava was an ally of Saakashvili during the Rose Revolution, but split soon after. He was a member of parliament 2004-2008. He was one of the most high profile members of the Conservatives, later to form Free Georgia. In last year’s local election he ran as candidate for Tbilisi mayor and received 2,3% of votes.

Despite the beating of the photographer, the rally went ahead as planned. Activists marched up the hill to former Prime Minister Bidzina Ivanishvili’s futuristic business center to show that they are against the government’s economic policy and handling of the currency crisis.

It was jointly organized by Free Georgia, the Reformers and the Christian-Democratic Movement, none of whom have representation in parliament.