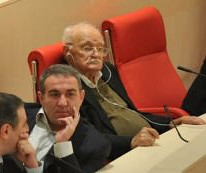 Ochiauri is a professor at the Academy of Arts. He was elected from the National Movement party list in October, 2012.

Next on the party list and likely replacement is Levan Tarkhnishvili, former head of the Central Election Commission (2007-2010).

Tarkhnishvili was in charge during the three elections in 2008: presidential election in January, parliamentary election in May and by-election in November. The opposition accused him of fraud and demanded his resignation.

Another MP from UNM to be replaced is Davit Sakvarelidze. He was recently appointed as new deputy chief prosecutor in Ukraine’s new government. Eka Kherkheulidze, a former MP in the previous period, will replace him in parliament.