Ivanishvili’s wife gets back her Georgian citizenship

Ivanishvili’s wife gets back her Georgian citizenship 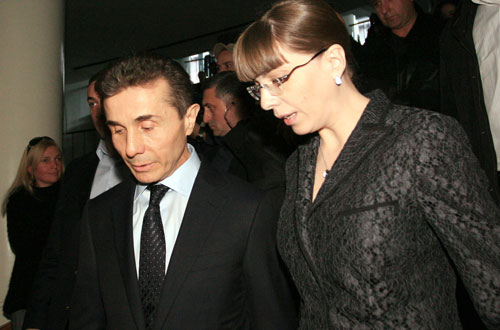 At least one of the Ivanishvilis (above) are now recognized as Georgian citizen, and they are past one important hurdle on the way to claiming political power in the country. A court in December ruled that president Saakashvili's decree revoking Ekaterine Khvedelidze's citizenship was unlawful, and the president Tuesday informed he will not appeal the ruling.

TBILISI, DFWatch – Ekaterine Khvedelidze, wife of Georgian billionaire Bidzina Ivanishvili, is a Georgian citizen again, after the president decided not to appeal a court ruling.

This paves the way for the Ivanishvili couple to formally register a political party and run in the election this fall.

On December 27 Tbilisi City Court ruled partly in favor of a lawsuit lodged by Mr Ivanishvili and found a presidential decree partly unlawful. The decree robbed the couple of their Georgian citizenship, which made it illegal for them to engage in politics.

President Mikheil Saakashvili had until today to appeal the ruling.

Eka Beselia, one of the lawyers of Ivanishvili said after the December 27 court ruling that it was a victory and she and the rest of Ivanishvili’s legal team are going to fight until the citizenship of Ivanishvili will also is restored.

Archil Kbilashvili, another of Ivanishvili’s lawyers, claims that they have appealed the other part of the court ruling to the Appeal’s Court; the decision to not restore the businessman’s citizenship.

The lawyers say the president won’t have any legal grounds to refuse to give him citizenship through naturalization because he will be obliged to name one of three valid grounds for refusal: Ivanishvili being a terrorist, an internationally wanted fugitive or that giving him citizenship can be a danger to society.

First two are excluded as the lists of terrorists and internationally wanted fugitives are established by the United Nations and Interpol. As for the third reason, the tycoon wrote in his open letters that he’s not going to change the government through street protests and demonstrations, which can be connected to some danger.

Ivanishvili’s lawyers say he satisfies all four requirements to be given citizenship through naturalization: living in the country for the past five years, knowledge of Georgian language, Georgian history and the legislative basics and owning business or property in the country.

“The businessman has already appealed to the Civil Registry regarding his citizenship and exactly this body will give an appropriate answer to the interested persons. Everything is going on legally in this direction,’ the president’s spokesperson Manana Manjgaladze said Tuesday.

Recently it was confirmed that Ekaterine Khvedelidze, wife of Ivanishvili, is going to set up a new political party to then participate in the upcoming parliament elections in October 2012.

Another chapter in this story as a new TV station which the Ivanishvilis are establishing. Khvedelidze recently bought the TV company Igrika (owned through her holding company Aktsepti). But this means that she will have to make a choice between a political party and a television station, because according to Georgian legislation a broadcasting license holder cannot be an official of a political party.

It was announced that Khvedelidze will only be the head of the party until the citizenship of Ivanishvili is restored. Launch of the new party is planned for February.