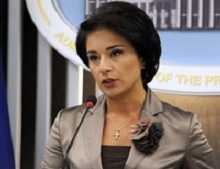 President Saakashvili's press spokesperson, Manana Manjgaladze, says all the information in Human Rights Watch' report may not be correct, but that it's interesting. The group criticizes Georgia for police brutality during the breakup of a peaceful demonstration last May.

TBILISI, DFWatch – The Georgian president, Mikheil Saakashvili, says through his press speaker that he may not agree with everything Human Rights Watch (HRW) is writing about his country.

HRW’s World Report 2011 is sharp in its criticism of the situation in Georgia, much of which revolves around the police operation to clear a peaceful protest in front of parliament on the night of 26 May.

The organization points to shortcomings of the justice system, both in terms of not protecting the rights of those who were exposed to police brutality that night, including journalists, but also in not launching a single criminal investigation against policemen, although sixteen were disciplined and four of them dismissed.

Furthermore, the influential group makes reference to the spy charges against four journalists in July, a case which is still classified and was settled by a plea bargain agreement, and the unscheduled audit of the media company Palitra. Both cases are by some seen as retribution for journalists covering the police brutality on May 26, HRW notes.

President Saakashvili’s press speaker says his administration carefully studies all information regarding human rights and the protection of such rights. She noted at her regular press conference that the administration may not agree with all the information and assessments which are presented in such documents, but that they are important and interesting sources of information.

“That goes for local as well as international organizations,” she added.