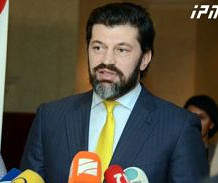 TBILISI, DFWatch–Former Georgian PM Bidzina Ivanishvili will keep promise not to return to politics, Minister of Energy and the first vice Prime Minister, Kakha Kaladaze stated on Thursday, diffusing speculations in the media that the oligarch would be included in the GD electoral list in order to attract more voters.

Kaladze, who at the same time is a Secretary General of the Georgian Dream – Democratic Georgia, a major political party with the ruling coalition, said Ivanishvili won’t be presented in the Coalition’s list for 2016 parliamentary election.

“When [Ivanishvili] entered politics, he immediately stated that he’d win and then… would leave politics. He’ll keep his word,” Kaladze said to journalists at the Tbilisi office of GD before opening of the party’s regional conference.

“Such things, in general, never happen. The people who come to power never leave by their own. This person [Ivanishvili] had voluntarily resigned. So, coming back to politics and be present in the electoral list, would not be correct,”- Kaladze said.

Bidzina Ivanishvili resigned from the PM post in November 20, 2013. Despite holding no official appointment, he is regarded of having immense influence upon the Georgia’s ruling coalition.