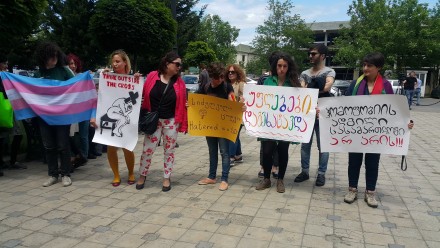 Koba Bitsadze, the executive director of LGBT organisation Temida, posted a video depicting a verbal assault by a stranger, who met him and two other people at night in downtown Tbilisi. The stranger was walking with a young woman, when he noticed the three, stopped them, and spoke about traditions and belief.

Bitsadze wrote that the man spat at his friend, calling them names.

One of the victims claimed that the stranger had a gun and tried to threaten them. Bitsadze called the police, who stopped the man as he was attempting to escape. Police questioned all the men involved in the incident.

On Monday, Beka Gabadadze of NGO LGBT Georgia, who had been present at the site of the incident, informed that the Tbilisi City Court fined the attacker with 100 laris ($47).

“The prosecutor and the police remained silent during the hearing. They just sat and listened to the homophobic person responsible for the attack,” he said recalling that the attacker tried to provoke them by calling to hit back and fight.

“This is why it is important for the government to have a different approach toward hate crimes”, Mr Gabadadze added.

Another case of possibly homophobic violence was reported on the same day, Saturday, May 21. A picture of an adolescent, who was stabbed in his thigh, was published on Facebook.

Two young men, one of them minor, were walking in Avlabari district in Tbilisi when they were attacked. The attackers stabbed one of them in the arm and the other one in the thigh. The latter was taken to the hospital.

“My friend had nothing to do with it. They approached me but he [the friend] resisted them, when they cut him. They were planning to attack me. They were nearby when we left the house,” one of the victims told journalists.

“I don’t really know why it happened, but it is obvious that we were stabbed because on the grounds of homophobia. I don’t know any other details. Investigation has to reveal the truth. There was no argument or quarrel. We walked by and because we are members of the LGBT community, they attacked us,” he added.

“This is why it is important that government had different approach to hate crimes.”

In 2012 on 17 May, the International Day Against Homophobia and Transphobia (IDAHOT), the first case of an attack on a group of LGBTQI activists who wanted to mark the day was reported. The next year, the IDAHOT rally was announced two weeks in advance, which resulted in a mass mobilisation of thousands of conservative members of the Georgian Orthodox Church. The religious activists rallied in the streets, disturbed the IDAHOT rally, and attacked its members, many of whom suffered injuries. There were also reports of journalists who suffered injuries during the clashes.

On the same day, there were reports of attacks on LGBT activists or members of the communityin the streets of Tbilisi.

This year, just like in 2014 and 2015, thousands of people marked the Day of Family Purity, which had been established by the Georgian Orthodox Church as a counterbalance to IDAHOT. Several LGBTQI activists were arrested for administrative offenses, particularly for an attempt to apply a stencil saying ‘All love is equal’ on the street and the walls of the Patriarchate.

Last week, a coalition of LGBTQI organisations in Georgia published a manifesto calling the authorities to address the problems of sexual minorities and to tackle the issue of protecting their rights. They urged the government to do the following: